Arsene Wenger's future as Arsenal manager plunged into further uncertainty on Monday night as the Gunners were soundly beaten at Crystal Palace.

Having won just two of their last seven Premier League games before travelling to Selhurst Park, Arsenal arrived late in south London and never got out of first gear as Sam Allardyce got one over his old foe - with the 3-0 victory easing Palace's relegation fears in the process.

Former Tottenham man Andros Townsend opened the scoring before Yohan Cabaye's well-taken second was added to from the penalty spot by Luka Milivojevic.

Large sections of Arsenal's support ended the night with a chorus of "Arsene Wenger, we want you to go" and "you're not fit to wear the shirt" - with protests against the 67-year-old likely to ramp up as they remain sixth following this damaging defeat.

The Frenchman has yet to announce whether he will sign a new contract at the Emirates Stadium but his players did nothing to ease the mounting pressure on his shoulders with a lacklustre display.

Cabaye was a surprise inclusion in the Palace side having been forced off with a calf injury last week and the France international blazed an early chance over having been played in by Jeffrey Schlupp.

His midfield partner was next to try his luck but Milivojevic could only arrow a long-range effort wide of Emiliano Martinez's right-hand post.

Arsenal's first opportunity fell to Mohamed Elneny, who won a corner as his shot from outside the box was pushed behind by Wayne Hennessey. 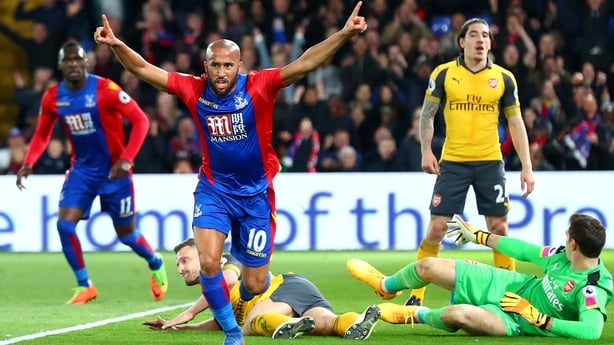 But it did not take long for Palace to find their range, as Allardyce's men built up a head of steam which was rounded off as Townsend ghosted in unmarked to convert Wilfried Zaha's scuffed cross.

Falling behind incensed Wenger but it seemed to wake up his side, with Alexis Sanchez forcing a smart stop out of Hennessey before bending a shot wide of goal soon after.

The Gunners were struggling to break down a Palace side which was looking to soak up pressure and it was Martinez who was next forced into action.

Christian Benteke exchanged passes with Zaha before his low shot was tipped behind by Arsenal's third-choice goalkeeper as Palace ended the first half on a high.

The Eagles returned after the interval and continued where they left off, Hector Bellerin blocking a Benteke shot behind as they looked to double their lead.

Martinez's blushes were spared moments later as he spilled a tame Townsend shot at the feet of Benteke, who was flagged offside after stroking the ball home.

Wenger turned to his bench in the hope of inspiring a comeback, with Olivier Giroud and Aaron Ramsey the go-to guys for the visitors.

But it was Palace who were celebrating again as another Zaha cross was superbly curled home by Cabaye, a man coveted by Wenger in the past.

The night would get even worse for Wenger as Martinez gave away a needless penalty, diving in at the feet of Townsend with referee Michael Oliver in no doubt.

Milivojevic made no mistake with the spot-kick as the Serbia international tucked away his first goal since joining Palace in January.

The goal was enough for Arsenal fans to turn on both Wenger and their team with the home fans revelling in the atmosphere.

The victory takes Allardyce's side six points clear of the relegation zone with just seven games left but the defeat, and the manner in which it was inflicted, could have a lasting impact on Wenger and a number of his players.