Swansea led from Spurs old boy Wayne Routledge's 11th-minute goal through to the 88th minute as it looked like Mauricio Pochettino's men would slip 10 points behind leaders Chelsea.

But Dele Alli equalised with his 15th league goal of the season before Son Heung-min and Christian Eriksen struck in added time to complete a remarkable 3-1 victory - their fifth successive league win.

This could prove a costly defeat for Swansea who now drop into the relegation zone with seven games left to play.

The day had began badly for Tottenham with their captain Hugh Lloris taken unwell at the team hotel after lunch, and former Swansea number one Michel Vorm had to take over.

Kyle Naughton had Swansea's first shot in anger but it was another former Tottenham player who was to open the scoring after 11 minutes.

Ayew held off Ben Davies to cross from the byline and Routledge, on a night when he became a Swansea record-breaker with his 182nd Premier League appearance for the club, reacted quickly to score from close range.

Spurs responded well with Alli almost equalising after an outrageous spot of ball-juggling and Eriksen testing Fabianski with a 20-yarder which dipped in front of him.

But Spurs struggled to break down a well-drilled Swansea unit who were happy to defend deep and utilise the strength and pace of Ayew on the break. 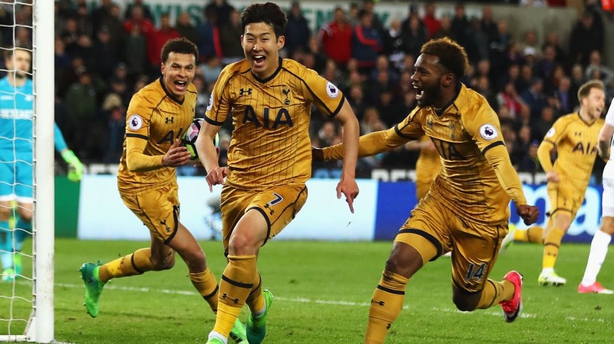 Both sides had penalty appeals at the start of the second half, Ayew tumbling to the floor and Son insisting that Federico Fernandez had handled his shot, but referee Jonathan Moss was unmoved on both occasions.

Spurs were enjoying the majority of possession but they were almost caught out when Naughton reached Mawson's terrific cross-field ball and his effort deflected inches wide off Davies.

Swansea were defending as if their lives depended on it and they had another attacker to worry about when Vincent Janssen was sent on just after the hour mark.

Janssen's arrival saw Son switch to the left and he fired straight at Fabianski as Spurs began to lay siege to the Swansea goal.

Alli's flick sent Janssen charging through on goal, but Fabianski bravely blocked at his feet and it looked as if that was the end of the Poland goalkeeper's night.

Fabianski groggily got to his feet and immediately kept out an Alli header, and insisted he was fine to continue as the substitutes' board went up with his number on.

It looked all over for Spurs, but then Alli tapped home Eriksen's deflected cross and Son burst on to Janssen's pass to score in the first minute of stoppage time.

The outstanding Eriksen then had the final word by beating Fabianski with a low shot, and the Tottenham title dream remains alive.