Scott Brown secured his seventh Ladbrokes Premiership title with Celtic on Sunday and admitted he will never tire of winning.

The 31-year-old, who joined the Hoops from Hibernian in 2007, won the title in his debut campaign and the thumping 5-0 win over Hearts at Tynecastle made it six in a row for the Parkhead club.

Celtic are unbeaten domestically this season with 28 league wins and two draws and still harbour hopes of the treble as they look towards the William Hill Scottish Cup semi-final against Rangers at Hampden Park later this month.

And the Scotland midfielder cannot get enough success.

He said: "That is why I am still here. I enjoy playing, winning trophies and that is why I want to stay here.

"It is amazing for all the lads. For myself, to be here for so long to win seven out of 10 seasons has been great but we want to continue to push on.

"We have eight league games to go and we need to concentrate on that.

"We have done fantastic all season. We have won the League Cup as well and we need to push on and try to get the Scottish Cup and keep the unbeaten run going as long as we can."

Brendan Rodgers enjoyed his first title win in his first season as Hoops boss and Brown insists the Northern Irishman will be in no rush to leave.

He said: "He has made Lennoxtown (training complex) a better place and we are getting a new pitch at Celtic Park so he has got ambition here and he wants to get into the Champions League next year again.

"He is always pushing boundaries and he wants people to improve their game.

"His training is hard, it is great tempo and it is enjoyable and you are learning every day.

"It is not just turning up for a wee game of five-a-side here and there and you are finished by 12 o'clock. 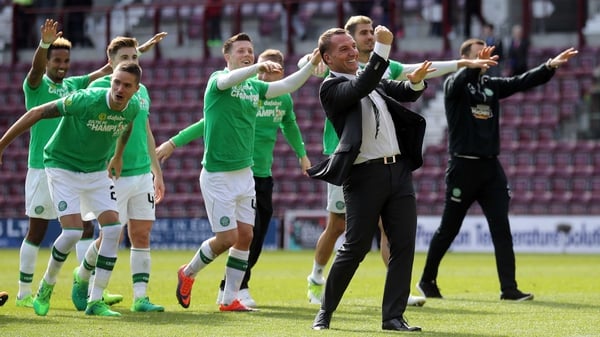 Rodgers delivers with style as Celtic ease to title