The Dutchman read out a prepared statement about the player's hamstring problem on Friday.

Koeman also said McCarthy "needs to take responsibility" with regard to the situation that has left the midfielder ruled out of Saturday's Merseyside derby at Liverpool.

After going into the international break having missed Everton's last two games because of a hamstring complaint, McCarthy was named in Ireland’s starting line-up for their World Cup qualifier against Wales last Friday, only to then be forced to withdraw having pulled up just before kick-off.

Koeman, who was at loggerheads with O'Neill earlier this season over McCarthy's use by Ireland after suffering injury, was asked about the matter on Friday at his press conference to preview the Liverpool match.

He had prepared for such a question and read from a sheet of paper, saying: "James had an injury when he reported for Ireland duty last week.

"But, of course, James has a strong desire to play for his country. So, when asked if he was fit to play, he said he felt he was fit, and he was selected to start the game by the Ireland manager who, in my opinion, in this instance was not protecting the player.

"Clearly James was not fit to play. He had trained only for two days with Ireland and he broke down during the warming up.

"He played only one game from the start in 2017, and he did not play for three weeks before the Wales game.

"In my opinion, he would need at least one full week of training sessions with the team to be declared fit.

"I spoke to James, and he needs to take responsibility of this. But it is not the first time."

Koeman said further details of conversations he has had with McCarthy were "private" and that any talks with O'Neill and the Football Association of Ireland was a "case for the club", while adding he was "not surprised but disappointed" that the situation had occurred.

He also admitted it had been "maybe one of my worst international breaks" due to the injuries sustained by his players. 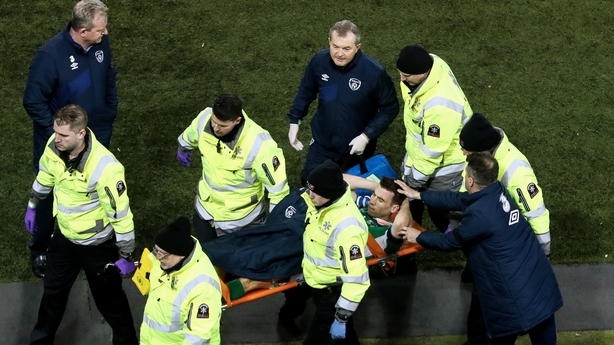 Seamus Coleman is facing months out due to the horrific double fracture to his leg that he suffered in the Wales match.

Koeman said on Friday with regard to the full-back's ongoing recovery after surgery: "He is still in Ireland.

That is the plan - first stay with your family, and we keep in contact, and then we shall see when Seamus will come back."

Meanwhile, Coleman's fellow defender Ramiro Funes Mori is likely to miss the rest of the season having torn his meniscus while playing for Argentina this week, something Koeman expects will require surgery too.

As well as McCarthy, Coleman and Funes Mori on Saturday, Everton will be without Morgan Schneiderlin (calf), who has also been ruled out of next Tuesday's trip to his old club Manchester United.