Republic of Ireland youth international Michael Keane says playing for England was always his dream and didn’t have to think twice once the Three Lions showed an interest.

The Burnley defender has been a regular around the England squad since Gareth Southgate took over as manager and earned his first cap in Wednesday's 1-0 defeat to Germany in Dortmund.

As well as ending the Clarets' 43-year wait to see an outfield player capped, it was the first step to a successful international career for the highly-rated Manchester United graduate.

Although born in Stockport, Keane was eligible for the through his father and wore green at Under-17 and Under-19 level only to pledge for England in 2012.

"I always wanted to play for England but when I was younger I was not at the level required so I thought it best to go and get some experience at international level. That is what I did," he said.

"When I got a call saying they wanted me I did not think twice. I was thankful to Ireland to play but England was my country. There was never any doubt.

"My dad was born in Ireland but moved to England when he was nine, he's over the moon."

Reflecting on the emotions of his big night, which can only have increased the growing transfer speculation around him, Keane added: "I have been striving to get here for the last year or two having come through the Under-21s so to finally do it, on a stage like this, against the world champions is a dream come true.

"I felt comfortable. There were a few nerves and butterflies as you would expect but it helped me playing alongside experienced players. They were talking through me the game the whole time."

Keane has the kind of innate confidence that courses through many players who emerge from United's academy.

And although he made only one Premier League appearance for the Red Devils, he never doubted his ability to reach the top.

"I always thought if I am playing well in the Premier League I would have a chance," he said. "I was always confident in my ability... I always thought I would make it at United.

"A few changes in manager did not help and when I left I felt I had a point to prove and it made me work that bit harder. I feel maybe I have proved it."

England's captain for the night in Dortmund, Chelsea's Gary Cahill, felt Keane was in his element despite the calibre of the opposition.

"I think the phrase is 'thrown in at the deep end' because they don't come much tougher than that for your debut, the world champions away from home," said Cahill.

"I thought he did fantastically well. He looked very comfortable out there.

"I'm a big fan of him. He can play football, he's comfortable on the ball and showed his composure, he slotted in and looked very established out there." 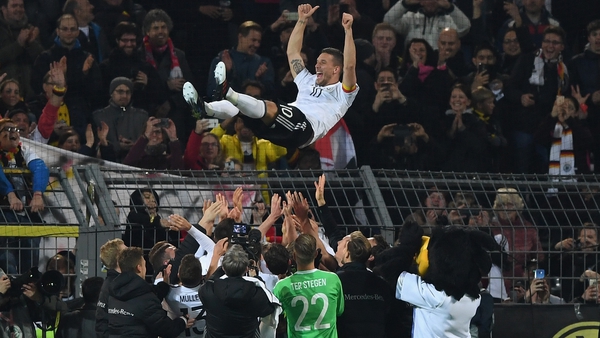 Podolski signs off in style as Germany beat England