Derry City players walked alongside the hearse as their team-mate was brought to the church.

President Michael D Higgins was in attendance along with leading figures from Irish football including FAI chief executive John Delaney.

Watch as Kenny Shiels delivers an emotional poem in memory of his captain Ryan McBride to mourners inside and outside of the church. pic.twitter.com/eJd9nl7E0O

Father Aidan Mullan spoke of McBride being a role model for the Derry community and that he was brave and knew no fear when playing for the Candystripes.

He said: “When we reflect on Ryan's life, we think at the outset, we think of him as an athlete on his prime, who achieved much and still had great potential, a versatile and accomplished footballer, of the thrilling moments he brought to so many supporters of Derry City, and across Ireland, over the past seven years.

“The club management, the team, the supporters, all have been caught up in his natural footballing ability; in his courageous play.

“As has been said many times, Ryan would put his head where other players would not put their boot. He was brave and knew no fear.

“As captain he was an inspirational leader in the dressing room and on the field of play.

“In the last several weeks Ryan was pivotal in great performances and contributed greatly to Derry's perfect start to the season; quick reflexes, heady play and competitive spirit, made him a great role model for many young boys and girls as well as City supporters and fans throughout the area.”

He was buried alongside his mother Noreen at Derry cemetery.

City manager Kenny Shiels read a poem in memory of his captain at the funeral. 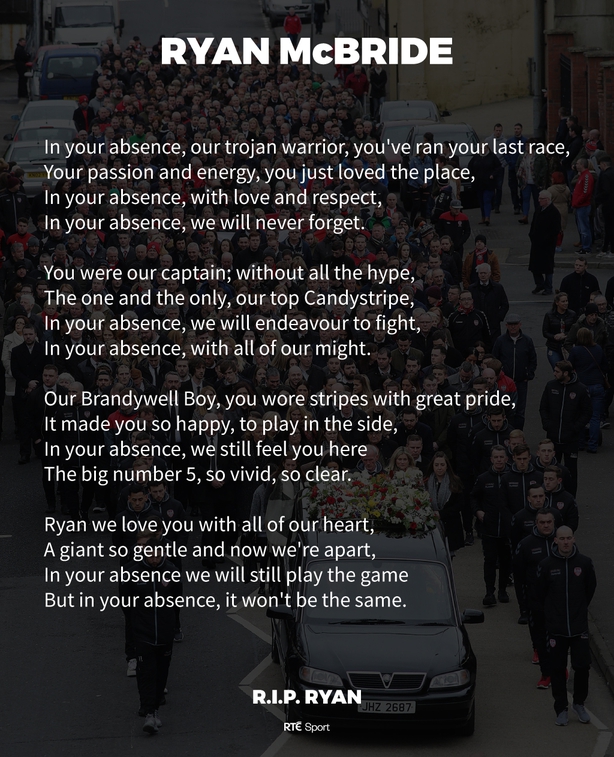