Ireland welcome Wales to the Aviva Stadium on Friday 24 March in a game that could go a long way to helping them book their place in next year's World Cup.

O'Neill's side will also face Iceland in a friendly international on Tuesday 28 March.

There are first senior call-ups for Brentford defender Egan and Reading midfielder Kelly, while Newcastle United goalkeeper Rob Elliot returns to the squad for the first time in a year since being injured against Slovakia.

Both Andy Boyle and Daryl Horgan are also included in the squad after impressing at Preston North End, following their move from Dundalk and both will hope to be included in the final squad.

Brighton and Hove Albion defender Shane Duffy (above) and Reading midfielder Stephen Quinn miss out due to injury, while Burnley midfielder Robbie Brady will be suspended for the Wales game after collecting his second yellow card of the qualifying campaign last November.

O'Neill has been impressed with both Egan and Kelly of late and while he admits that they may miss out when the squad if cut, he sees a big future for both players

"I’ve watched the both of them," he said. "I know John from my days at Sunderland, he was only a kid then. He’s got a great attitude to the game.

"Young Kelly I don’t know personally but he’s playing pretty regularly and he looks as if he’s got decent control.

"It’s a rather large squad that I’m going to pear down at some stage but it’s a bit of boost for players who think they are doing alright at club level." 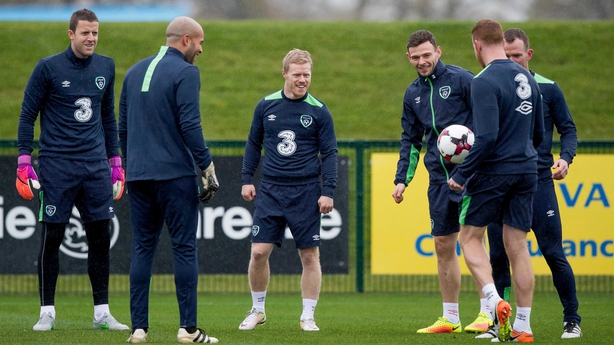 Likewise O'Neill is happy with the way that Boyle and Horgan are developing at Preston and expects them to improve further as they settle into life in the Championship.

"I saw Preston play against Fulham recently where they were pretty wretched, the team was. Andy was sub and Daryl played in the game but was taken off in the match. But Fulham were too strong for them on that particular day.

"But some of Preston’s results have been terrific – the manager has done a great job there.

"There are a number of [Irish] players playing. Young Browne played that day as well. It was a poor day for Preston but Aiden played a great through ball for one of the goals.

"Overall, they [Horgan and Boyle] are just settling in. Andy has been getting into the side for the past couple of games and it has been great for them, obviously coming on the back of the exploits for Dundalk and getting into our squad, which brought them to the attention of Preston and I am really pleased for them."