Brendan Rodgers believes his side should have been awarded a stoppage-time penalty as he watched Celtic drop points for only the second time in the league under his guidance in a 1-1 draw with Rangers at Parkhead.

The champions failed to win in the Premiership for the first time since September's 2-2 draw at Inverness but Rodgers' side maintained their unbeaten league status in a tense Old Firm derby. 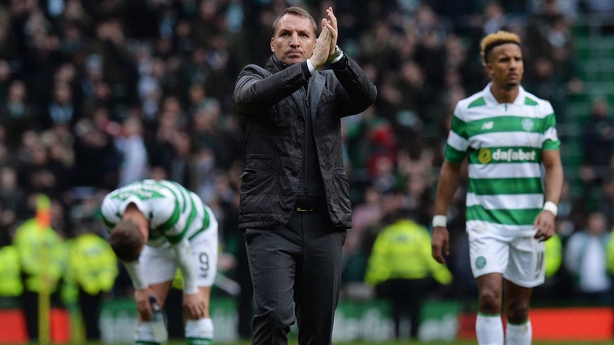 Rangers striker Martyn Waghorn squandered a brilliant chance to open the scoring but was denied by a fine save from Hoops goalkeeper Craig Gordon before Stuart Armstrong put the league leaders in front after 35 minutes with a fine left-footed strike.

Substitute Leigh Griffiths was hauled down by Gers goalscorer Hill in the third minute of added time but the striker's appeals for a spot-kick were waved away by referee Bobby Madden, much to the annoyance of Rodgers.

💬 BR on Craig Gordon: "He's now one of the top keepers in Europe for me. When he had to make saves, he made big saves. He was first-class."

He told Sky Sports: "It's never nice when you concede so late. We are disappointed with the goal but I'm really proud of the players.

"We aim to win every game and if you can't win then you take a point and my only disappointment is that it was a penalty at the end.

"Whenever Clint Hill tells me that 'he got away with it at the end' then that lets me know that it was a penalty.

"But like I say, our run continues - we were focused to get the result, we didn't get the three points but we will take the point and move onto the next game.

"These types of games are always tense and difficult games to play in. I just thought we could have played better and better (at) controlling the first half and I was much happier in the second half.

"But overall, it probably shows the level the team is at where we are disappointed to not win the game but certainly if you don't win it, you take your point and move on."