Son Heung-min's hat-trick fired Tottenham into the FA Cup semi-finals but their 6-0 demolition of Millwall was marred by racist chants towards the South Korean from visiting supporters.

Harry Kane also limped off injured in the sixth minute at White Hart Lane after appearing to hurt his right ankle but even without their star striker, Spurs, and Son, blew their League One opponents away.

Son's treble was particularly fitting given the South Korean was subjected to abuse from Millwall supporters.

The visiting fans sang "DVD" and "You're selling three for a fiver" at the 24-year-old during the first half, thought to be referring to traders of bootleg copies of films. 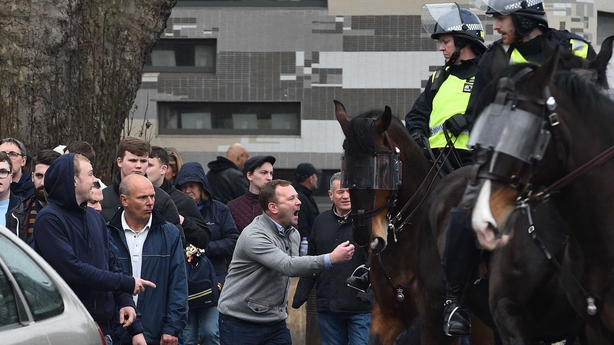 Christian Eriksen, Kane's replacement, broke the deadlock before Son netted either side of half-time.

Dele Alli added a fourth and there was even time for Vincent Janssen to grab his first Tottenham goal from open play before Son hit his third late on.

Spurs will now await Monday's draw for the semi-finals where they can meet Manchester City, Arsenal or the winners of Chelsea and Manchester United, who play on Monday.

Much of the talk in the build-up surrounded security given the history of animosity between these two London clubs, and there was a heavy police presence around the ground before kick-off. 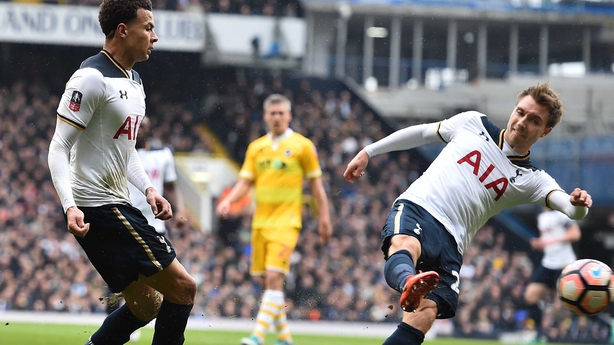 More than a dozen police vans lined the front of the stadium to contain supporters, who exchanged unpleasantries as well as throwing bangers and flares at each other.

On the pitch, however, any tension quickly disappeared as Tottenham ran riot to maintain their unbeaten record at home and win what is set to be their last ever FA Cup fixture at White Hart Lane before it is re-built.

Kane's injury though could wreak havoc with their ambitions in both this competition and the Premier League.

It was his right ankle that caused him to miss seven weeks earlier in the season, and he now risks missing next weekend's home game against Southampton and England's fixtures against Germany and Lithuania later this month. 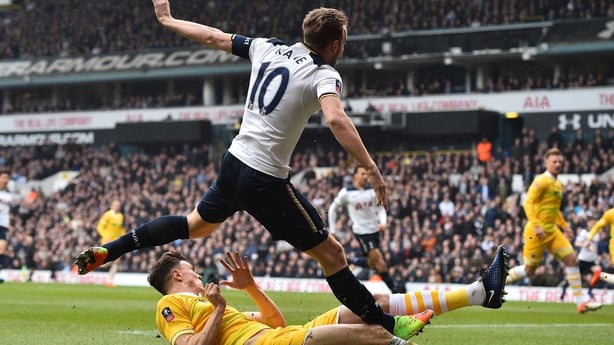 On Kane's injury, Alli told BBC One: "It is always horrible to lose a player like Harry, he's been in top form, but I think that shows our depth in quality and everyone stepped up a gear.

"It was an important win for us, not just for the cup but for the league as well, it was important that we kept the form and get in the goals.

"We are just hungry for goals and we knew it was going to be a difficult game and didn't want them to get back into the game because they did have a threat.

"But like I say, everyone wants to score and I think this is a good thing for this club.

"It's really difficult to score a hat-trick!"