Rangers caretaker manager Graeme Murty is glad he did not know he would still be in charge at Celtic Park until later in the week.

Murty is set to relinquish his role to Pedro Caixinha but Rangers failed to finalise a deal in enough time to have the Portuguese coach in place to prepare for today's Parkhead clash (12pm).

Murty felt it would be "arrogant and presumptuous" to think he would lead Rangers against their Glasgow rivals and his approach allowed him to concentrate on the coaching task at hand earlier in the week.

The club's under-20s coach, who has had five games in charge, said: "If I'm honest, until Thursday I didn't consider it would be me.

"I think that has been the best way I could have approached it as I have not let it get too big or dominate my thoughts for too long. I have no doubt it will from now on, but the bit I am going to try and use is to look at the players and see what they need. Because I have no doubt we will have a hard time and it will be a hard game.

"But I have to put myself to the back of my mind if that's possible and look at them because they have a massive task. I'm just trying to get everything they need over to them, and be as clear in my mind as I can be for them."

During his Reading career, Murty spoke of his father's allegiance to Celtic and how the club had played a big part in his family life.

So the former Scotland international has not needed an education on Old Firm matters.

🎥 Watch the Bhoys in training at Lennoxtown ahead of Sunday's Glasgow Derby. #COYBIG pic.twitter.com/eks6VVznpn

"It's the experience of it that I'm looking forward to, and the growth we can get as a team and a football club and personally, that we can take from it.

"If we can approach it as bravely as we have done in this week's work, I think it's there to be relished and enjoyed.

"As much as I won't enjoy it on the sidelines, I think looking back after the event I will acknowledge it for being a watershed moment in my career in terms of my development."

But Murty refused to even consider how much a victory against the unbeaten Premiership leaders would mean.

"I'm looking at a group of players doing themselves and making sure they turn up on Sunday fully prepped and ready to go and relishing the atmosphere and the challenge. If we get those parts right, the result will hopefully take care of itself and I will tell you how I feel afterwards." 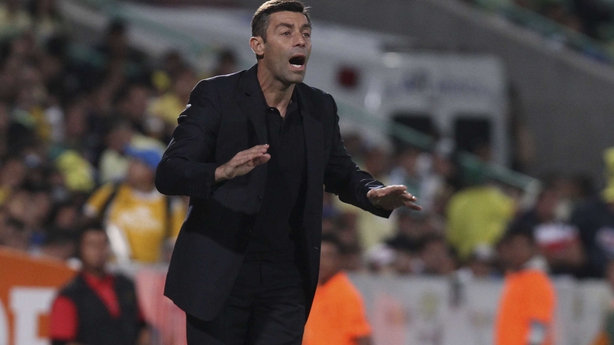 Meanwhile, Caixinha has vowed to "provide a winning and entertaining Rangers team" after signing a three-year deal.

The 46-year-old Portuguese coach arrived at Glasgow Airport on a flight from Dubai at midday on Saturday and, after evading the waiting media and fans, was announced as the Light Blues' new boss just over three hours later.

After completing the switch from Qatari side Al Gharafa, Caixinha told Rangers' official website: "It is a great honour to join Rangers Football Club.

"This club has a great history and tradition and I am proud to follow in the footsteps of legendary Rangers managers like Walter Smith, Graeme Souness and Jock Wallace.

"Rangers is a name that is known worldwide and I am looking forward to forging a positive relationship with supporters and meeting the playing squad and staff at the club.

"I know there is a lot of hard work ahead and I assure all our fans that I will do all I can to provide a winning and entertaining Rangers team."

Rangers agreed a deal with Al Gharafa on Thursday for the release of Caixinha, who moved to Qatar in 2015 after a successful spell with Santos Laguna, a Mexican club with close links to Celtic.

The former goalkeeper managed Uniao de Leiria and Nacional in his homeland after spells on the coaching staff at the likes of Sporting Lisbon, Panathinaikos, Rapid Bucharest and Saudi Arabia.