Pep Guardiola felt Manchester City had reached the FA Cup semi-finals the hard way after they saw off Middlesbrough at the Riverside Stadium.

Goals in either half from David Silva and Sergio Aguero were enough as City won 2-0 to become the first side to book their place in the last four.

City's road to Wembley has seen them go to West Ham, Crystal Palace, Huddersfield and Middlesbrough - and Guardiola admitted it had been a tough route.

"We're so happy to be through because to reach the semi-finals of this competition is so complicated," Guardiola told BT Sport 2.

"We played all our games away - against three Premier League sides and one of the best in the Championship, so a big compliment to the team.

"We produced a good performance today. We were there from the first minute.

"The first goal was important but it was down to how we approached the game.

"Now we recover good to play another final on Wednesday." 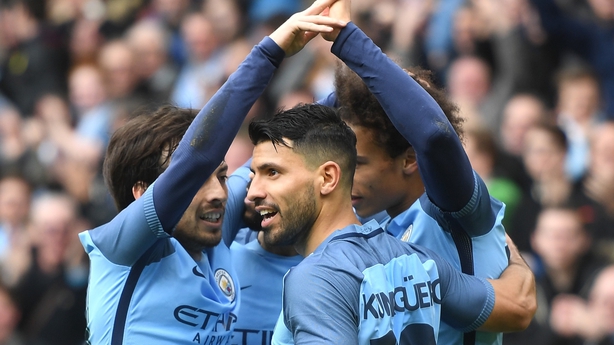 City have now kept six successive clean sheets on the road since their 4-0 defeat at Everton in mid-January and Guardiola added: "When you attack good, you defend good because the ball is far away from our goal.

"The two or three chances they had Claudio (Bravo) made some amazing saves.

"That is why we were able to have another clean sheet which is really good for us."

Pablo Zabaleta's only criticism of City's performance was that they were not clinical enough in front of goal.

"It's a tough place to come," said Zabaleta. "They're a very physical team and really dangerous from crosses.

"We were really good at the back - very solid - and then we looked very dangerous going forward. We created a lot of chances and should have scored a few more goals.

"We were the better team and deserved to go through."