Nabil Fekir and Alexandre Lacazette fired late goals as Lyon hit back to beat Roma 4-2 at the Stade des Lumieres in their Europa League last 16 clash.

Roma struck twice through Mohamed Salah and Federico Fazio to lead at half-time after Mouctar Diakhaby had given Lyon an early lead.

Lyon midfielder Corentin Tolisso restored parity early in the second period and, after Fekir had put the French side ahead, Lacazette added a crucial fourth in stoppage time.

Mbwana Aly Samatta's double helped Genk to a 5-2 win in their all-Belgian tie at Gent.

Samuel Kalu levelled for Gent after Ruslan Malinovskyi's low free-kick had given Genk the lead, but further goals from Omar Colley, Samatta and Jere Uronen put the visitors 4-1 up at half-time.

Kalifa Coulibaly's header reduced Gent's deficit again with half an hour left, only for Samatta to grab his second and Genk's fifth.

Danish midfielder Daniel Wass broke the deadlock for Celta with a free-kick early in the second half and although the Russians responded through Swede Viktor Claesson six minutes later, Beauvue headed home Hugo Mallo's cross in the 90th minute. 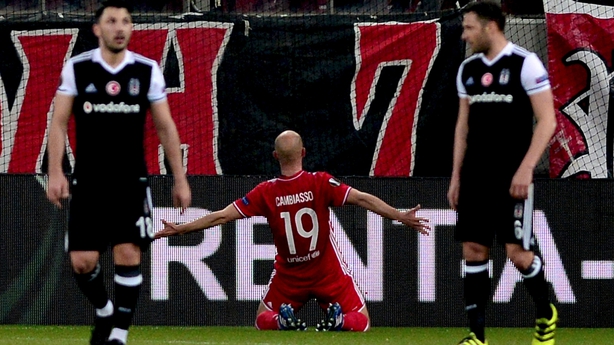 Besiktas hold a slight advantage in their tie against Olympiacos after drawing 1-1 in Greece.

Schalke and Borussia Monchengladbach also drew 1-1 in an all-German encounter in Gelsenkirchen, where Jonas Hofmann's first-half opener for the Foals was cancelled out by Schalke midfielder Guido Burgstaller before the interval.

Danish champions Copenhagen will defend a slender lead in their return leg against Ajax after a 2-1 win at the Parken Stadium.

Copenhagen made a flying start through Rasmus Falk Jensen's low finish inside the first minute and although Danish teenager Kasper Dolberg equalised for Ajax before half-time with his 15th goal of the season, former Cardiff striker Andreas Cornelius headed a second-half winner.

Anderlecht head back to Brussels with a one-goal advantage after Nicolae Stanciu's solitary strike secured the Belgians a 1-0 win against Apoel Nicosia in Cyprus.

Romania international midfielder Stanciu fired home a low shot from inside the penalty area in the 29th minute, while Apoel pair Igor de Camargo and David Barral went closest for the home side in the second half.