Barca scored three times after the 88th minute to stun PSG 6-1 at the Nou Camp and win their Champions League last-16 tie 6-5 on aggregate.

No team in UEFA club competition history had ever successfully overcome a 4-0 first-leg deficit but Barca wrote themselves into the record books thanks to goals from Neymar (two), Luis Suarez, Lionel Messi, a Layvin Kurzawa own goal and Sergi Roberto.

The historic triumph was sure to have been celebrated well into the night by followers of the Catalan giants, and Pique quipped that there might be some longer-term implications as well.

"Hospitals should hire nurses in nine months' time because there will be a lot of love," he said, in a quote reported by Barcelona's official Twitter account.

Barca capped a remarkable comeback against shell-shocked PSG when substitute Sergi Roberto stabbed home the winner five minutes into stoppage time, sending the Nou Camp wild and keeping the club on course for a trophy treble in what will be Luis Enrique's last season in charge.

Barca are also top of LaLiga and play Alaves in the Copa del Rey final, but despite that success and their progress in Champions League, the team and Enrique have come under fire for some of their performances this season.

Pique was quick to round on his club's critics after Wednesday's win, though.

He said in quotes reported by AS: "I understand that there are many people who want to bury us, coaches like (Arrigo) Sacchi, (Raymond) Domenech and I can give a list of many more coaches...but we've shown that we're still here, that we want to win.

"There will be a day when we fall down, but we're still alive."

He added: "You can talk about a miracle, an historic party. Today I'm going to party even though I have training tomorrow. After tomorrow we will look to the league game."

Enrique announced last week that he will be leaving Barca at the end of the campaign, having already won eight out of a possible 10 trophies since replacing Gerardo Martino as boss in 2014. 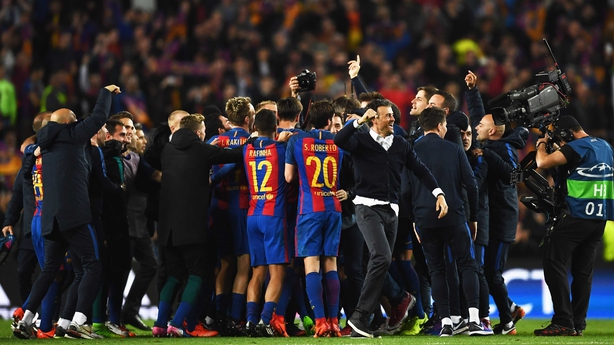 Pique said: "He's not had the best of treatment and I think his role has been key. I would like him to dominate the front pages because his planning and the way he approached the game has led to our qualification. He deserves all the praise."

While Enrique is on his way out of the Nou Camp, the future surrounding Barca's star forward Messi remains unclear.

The Argentina captain's contract runs out in 2018 and he has been linked with a move away. Messi's fellow forward, Neymar, does not think the 29-year-old is going anywhere, however.

He said in Marca: "Messi will renew, I'm sure of that."

The Brazilian added of his side's win: "It's the best game that I've played in my life. For the history, for the goals, for the level of the team. I'm in a very good moment. I'm very happy." 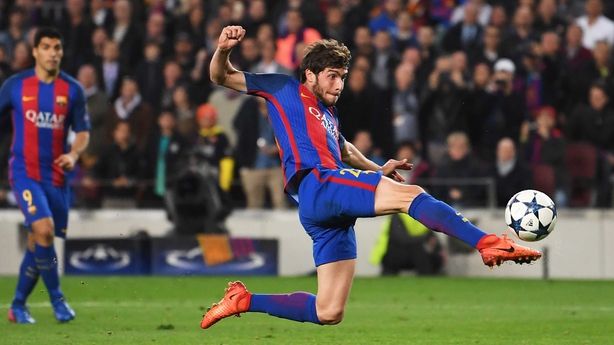 As Barca celebrate an unprecedented result, PSG were left to wonder what went wrong.

The French champions had seemingly ended the home side's hopes when Edinson Cavani netted an away goal in the 62nd minute, only to be swept away by a late Barca onslaught.

Defender Thiago Silva felt there were refereeing decisions that went against his side - highlighting the stoppage-time penalty given for a supposed foul on Suarez that Neymar ended up scoring from - but conceded they did not deserve to go through.

The Brazil international said on his club's website: "It's inexplicable, we didn't play today. It's difficult, because we didn't manage to put our game in place and qualification got away from us.

"We got a very good result in the first leg, but this evening, we didn't deserve to go through to the quarter-finals.

"It's not an excuse, but there was no foul on Suarez, and we could have had one of our own. Having said that, we mustn't blame the referee, because we weren't able to play our game."