Pep Guardiola bemoaned Manchester City's home form after his side were held to a frustrating goalless draw by Stoke.

The stalemate was City's fifth at the Etihad Stadium in the Premier League this season and left them 10 points behind leaders Chelsea.

Guardiola said: "Our results away are much better than at home. Maybe next season will be the opposite. We dropped points. We have to analyse.

"In the first half we had problems. They defended aggressively, deep, and our strikers stayed there, didn't move.

"The second half was much better and we created chances to score. The goalkeeper from Stoke did not save too much because we didn't really shoot at the net but we were there [attacking] in the last minutes.

"It is football, it happens sometimes in the season, but I don't have regrets about how they fought." 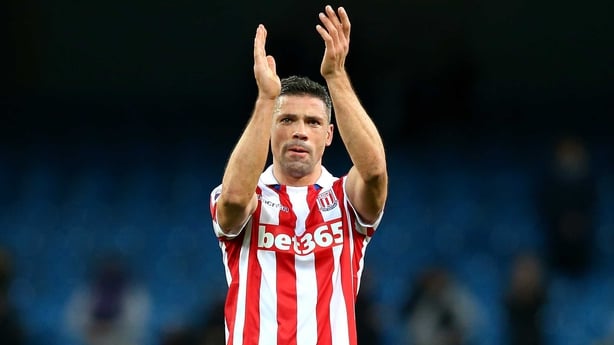 City came to life after a drab first half but could not find a way through Stoke's stubborn rearguard with Sergio Aguero, Leroy Sane, David Silva and Kelechi Iheanacho all having good chances.

Guardiola, thinking ahead to Saturday's FA Cup quarter-final at Middlesbrough and next week's Champions League trip to Monaco, rotated his squad for the game.

In-form Raheem Sterling was left out completely while Silva was only introduced as a second-half substitute.

Guardiola did not agree the tactic had backfired and insisted he had little choice.

He said: "The rotations are good when you are successful in the results, but when you're not always we miss the other people.

Stoke boss Mark Hughes was particularly pleased to see his team show such strength against one of the league's top teams after their capitulation against Tottenham 10 days ago.

The Potters conceded four goals in the first half against Spurs but were resolute throughout at the Etihad Stadium. 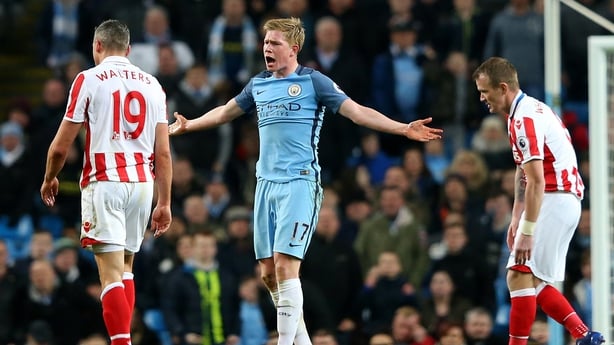 "We had too many questions asked of our performance at Spurs. We held our hands up, we weren't good enough on the day and were well beaten. Because that was fresh in our minds, you saw a response.

"We had a good response at the weekend in a different type of game [a 2-0 win over Middlesbrough].

"Tonight we needed to answer a few questions that people had posed of us and hopefully we have done."

Hughes handed a first start in a Stoke shirt to striker Saido Berahino and praised the performance of the former West Brom man.

Berahino showed some neat touches and held the ball up well before being replaced late on by Glenn Whelan.

Hughes said: "He showed good levels today. We made a change, we just needed an extra body in midfield. He still had good energy, he could have finished the game, so it wasn't as though he was tiring markedly.

"That showed he's fit and up to speed now so he's going to get lots of games from now until the end of the season."