Zlatan Ibrahimovic's failure from the spot could be compounded by a spell on the sidelines, with the Football Association sure to look at the Manchester United striker's elbow and Tyrone Mings' stamp after 10-man Bournemouth secured a memorable 1-1 draw at Old Trafford.

Ugly scenes and poor officiating overshadowed a thrilling lunchtime encounter as Marcos Rojo's first ever Premier League goal was cancelled out by Josh King's penalty as the first half ended chaotically.

Andrew Surman received the first red card of his career - awarded once blundering referee Kevin Friend realised he had booked the Bournemouth captain twice - having reacted angrily to Ibrahimovic's elbow on Mings, who moments earlier stamped - inadvertently or otherwise - on the United striker.

The officials' report will make for interesting reading as neither player was shown a card for incidents that could well lead to retrospective action from the FA.

Referee Friend's display is also set to dominate column inches in the aftermath of a match Ibrahimovic looked set to win for United after Adam Smith was adjudged to have handled a Paul Pogba cross.

However, EFL Cup hero Ibrahimovic's spot-kick was saved by the impressive Artur Boruc as Bournemouth ended a four-match Premier League losing streak as United stuttered to a 10th Premier League draw of the season.

Cherries boss Eddie Howe's spirits will have been lifted by his players' display after spending the night up with a sickness bug.

A late arrival at Old Trafford, he may have feared the worst as Untied flew out the blocks and returning captain Wayne Rooney missed after 73 seconds.

There was a verve about United's attack, but so too a wastefulness.

Rooney and Ibrahimovic transpired to spurn an opportunity from which the Cherries broke, with a slip preventing Benik Afobe - the scourge of United in his MK Dons days - rounding David de Gea.

It was one of few scares for a United side that continued to press, with Ibrahimovic and Martial continuing to threaten before the opener came through an unlikely source as Rojo reacted quickly to turn in Antonio Valencia's driven cross-cum-shot.

The 23rd-minute goal took the sting of United's attack as Bournemouth kept their shape if not their heads at times, with the visiting support making their frustration at the booking of Harry Arter and Surman clear.

However, the award of a penalty raised spirits as Phil Jones clumsily brought down Marc Pugh, with King firing home with aplomb.

The feel-good factor did not last long, though.

Ibrahimovic and Rooney forced fine saves from Boruc, before tempers frayed as Ibrahimovic caught Mings with an elbow shortly after the Bournemouth defender stamped on the Swede. 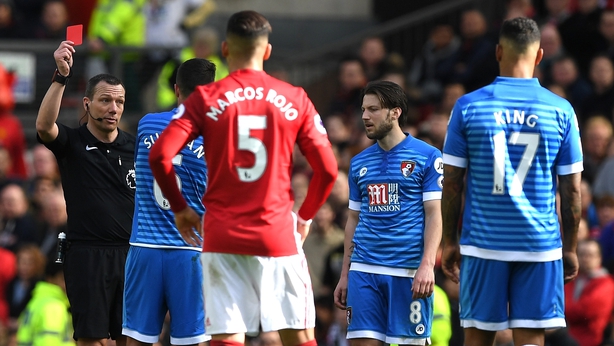 Neither were booked but Surman was for shoving Ibrahimovic - although it took a while for referee Friend to realise it was second yellow card.

The anger was palpable as half-time came and went, with United in the ascendancy when play resumed.
Rooney saw a strike deflected and Pogba was impressively denied by Boruc, but Bournemouth weathered the storm as Mourinho made a triple substitution in the 70th minute.

A minute later United had the chance to strike a decisive blow as Smith was adjudged to have handled a Pogba cutback. Ibrahimovic stepped up for the spot kick, only to be denied by a fine Boruc save low to the keeper's right.

Referee Friend was under scrutiny again moments later as substitute Marcus Rashford came close, despite Arter being on the deck after sustaining a head injury.

The Bournemouth midfielder then avoided a second booking as Mings went off after an awkward fall, much to the home fans' amusement.

The closing stages resembled two boxers wildly swinging punches at one another, with United landing more blows. However, Bournemouth held firm to secure an important 1-1 draw.