Finn Harps left the Carlisle Grounds not at all happy with referee Anthony Buttimer as Bray Wanderers secured a second win of the season in an eight goal thriller by the seaside.

The Cork official waved away Harps appeals for a penalty before giving Bray a soft free-kick for their lead goal - scored by Anto Flood - and then a harshly awarded penalty converted by Gary McCabe all inside the opening 20 minutes.

And though Harps hit back through Ciaran O’Connor, Aaron Greene got a third for Bray before half-time.

The action continued apace into the second half with Gary McCabe and Dylan Connolly scoring for Bray as O’Connor and Ethan Boyle found the net for harps.

Bray squandered the first threatening moment of the game on four minutes when McCabe put his free kick high of the crossbar after Barry Molloy had upended Connolly some 25 yards out from goal.

The home side soon had a let off, though, when Buttimer waved away Harps appeals for a penalty when Kevin Lynch certainly appeared to knock over Sean Houston in the home area.

A free kick for a dubious foul at the other end saw Bray take the lead in the ninth minute.

Again Connolly went down, if rather easily, under Boyle's challenge.

This time McCabe got his free kick on target. Harps’ keeper Ciaran Gallagher could only parry it, and after Hugh Douglas had his follow-up blocked by O’Connor, the ball ran for Flood who shot to the back of the net from close range for his second goal the season.

But Harps were well in the game and O’Connor worked Peter Cherrie with a shot for a tight angle on 15 minutes, having initially missed his kick from an errant Conor Kenna header.

The visitors were then livid on 20 minutes when Buttimer pointed to the spot after Funston blocked Greene’s cross with his arms, even though it looked just outside the area.

McCabe confidently sent Gallagher the wrong way from the spot.

Channelling their anger well, there was plenty of fight in Harps and they got a goal back on 32 minutes.

Jonny Bonner free kick from a tight angled sailed over Peter Cherrie to come back off the far post with Ciaran O’Connor reacting quickest to stab the ball over the line.

In an incident-packed first half, Bray regained their two goal lead three minutes before the break. Picked out by Lynch’s fine diagonal ball, skipper Kenna’s cross was powered to the net off the head of Greene.

Harps refused to line down and pulled a further goal back two minutes into the second half.

Latching onto captain Ciaran Coll’s ball over the top, O’Connor skilfully cut past a defender before his shot had too much venom for Cherrie who pushed it into the air only to see in drop in behind him to the net.

Despite Harps’ pressure, McCabe got his second goal for Bray on 58 minutes.

Gallagher raced outside his area to clear Keith Buckley’s through ball with a diving header. The ball ran to McCabe who shot to the empty net as Gallagher lay injured having collided with Boyle.

Bray then added their fifth goal on 69 minutes. 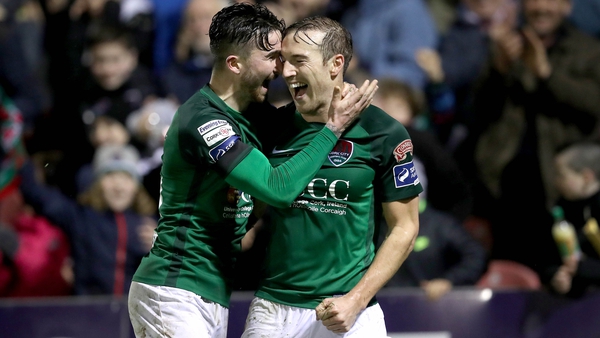