Jose Mourinho says Chelsea have the Premier League title wrapped up and can afford to pay more attention to their FA Cup quarter-final than Manchester United.

United had to come from behind to see off Championship strugglers Blackburn in their fifth-round clash on Sunday, with goals from Marcus Rashford and substitute Zlatan Ibrahimovic cancelling out Danny Graham's opener.

The draw followed shortly after the full-time whistle and pitched Mourinho's men against his former club at Stamford Bridge - a first cup meeting between the teams since the same stage four years ago.

Chelsea edged that tie, winning 1-0 in a home replay after drawing at Old Trafford, and Mourinho suggested their eight-point lead in the league meant they could begin planning for a repeat performance now.

United, on the other hand hand, continue to balance a Europa League campaign, an EFL Cup final and their battle for the top four.

Mourinho initially offered "no reaction" to the draw but could not resist an early start to the mind games. 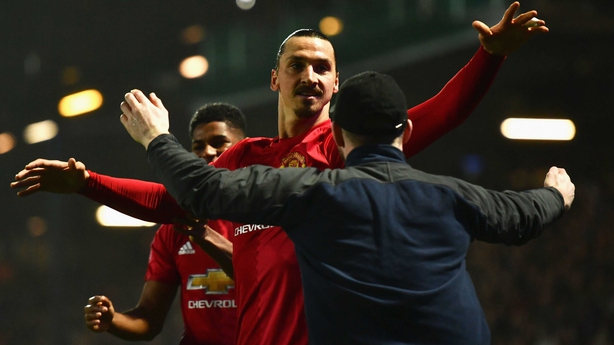 "Probably Chelsea can only think about that (the FA Cup) because I think they are champions and they have nothing else to fight for," he said in a clinical and brief press conference.

"I have so many things to think about."

Those differences stressed, he then added: "The match is in one month's time. I don't want to be speaking about it."

That United do not have a replay to add to their schedule is down to Mourinho's decison, shortly after an hour's play, to send for Paul Pogba and Ibrahimovic.

The pair had been slated for a rest but when called upon, combined for the decisive goal of the game - Ibrahimovic's 24th in a United shirt.

"The connection between quality players any time is a help," said Mourinho.

"I knew that (Ibrahimovic) would be a very important player for us. One goal more or one goal less, I knew the contribution would be massive." 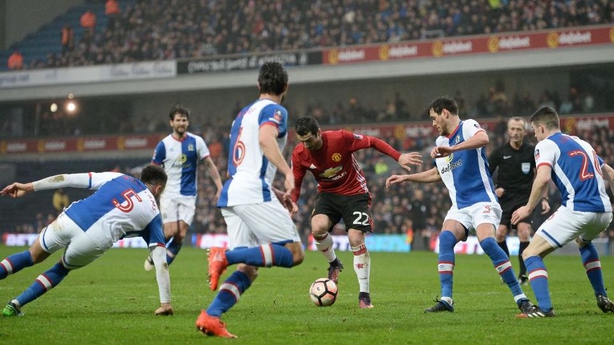 Although his scoring record suggests a man at ease with the challenge in front of him, the veteran striker has been impressed at the quality of opposition since arriving in England.

"Every game is unpredictable," the Swede told BT Sport.

"Since I came to England every game - especially in this FA Cup - is like a final. It doesn't matter if they play in the Championship. So many games have not gone to the favourites. We don't underestimate anybody.

"The team did well before the changes too but in the second half, me and Paul came in to boost that up a bit. He gave a great ball and I scored a goal.

"We are happy with the win. We are still in every tournament. We will keep working hard, keep going and now is the decisive moment."

For Rovers boss Owen Coyle, the game was a chance to forget about his side's relegation battle.

A strong performance with a depleted team suggested they should have enough to escape the drop and their manager was proud of what he saw.

"We gave a very good account of ourselves but nobody likes losing games," he said.

"We did enough to get another shot at it. We now have to show that display week in, week out in the Championship.

"We know we have good footballers here, nobody could say they are short-changed by us when it comes to entertainment.

"We showed great spirit and courage to try and get an equaliser at the end and we will need those qualities for the rest of the season."