Real Madrid marked captain Sergio Ramos' 500th appearance for the club by returning to the top of LaLiga with a hard-fought 3-1 victory away to bottom-of-the-table Osasuna.

Goals from Cristiano Ronaldo, Isco and Lucas Vazquez ensured the European champions eventually saw off their stubborn hosts to make Barcelona's occupation of top spot short-lived after their 6-0 romp away to Alaves in Saturday's afternoon kick-off.

Zinedine Zidane had warned that, after their inaction thanks to last week's postponement at Celta Vigo, the task facing his team might prove more difficult than many were predicting.

And so it proved on a rainy night at El Sadar Stadium where Ronaldo (24), Isco (62) and finally Vazquez in the third minute of stoppage-time made the difference to take Madrid a point clear of Barcelona again, despite a fine first-half performance from Osasuna which was capped by Sergio Leon's 33rd-minute equaliser. 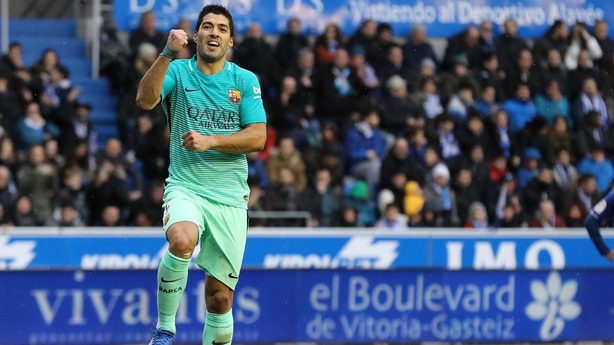 The former Liverpool forward began the rout at the Mendizorrotza Stadium with his first goal in the 37th minute, and he completed the scoring in the 67th to take his tally for the season to 18.

Four more goals in the space of half-an-hour came courtesy of Neymar (40), Lionel Messi (59) and Ivan Rakitic (65) - as well as Alexis' misfortune when the Alaves defender put the ball in his own net.

Luis Enrique's team were therefore top of the league for the first time since October, but only for a few hours with Madrid - who still have two games in hand - responding with a victory of their own.

Real Betis banked another point in mid-table in their early kick-off stalemate against Valencia.

Victor Sanchez's men hit the woodwork in each half, through Ruben Castro in the seventh minute and then Petros in the 51st.

But in the end, it stayed honours even, keeping Betis four points above their visitors at the Estadio Benito Villamarin.

Striker Aritz Aduriz provided the 89th-minute winner as Athletic Bilbao came from a goal down to sneak a 2-1 success against Deportivo La Coruna at San Mames.

Deportivo, back in action following last week's postponement against Betis, went in front just before half-time through Emre Colak.

Athletic had missed their share of chances but eventually found a way back into the match when Iker Muniain equalised in the 71st minute, and Aduriz completed the comeback.