Crouch opened the scoring in the Potteries in the seventh minute when he tapped home Marko Arnautovic's cross from close range.

Coleman, making his 200th league appearance for the Toffees, saw his cross-cum-shot guided home by Stoke defender Ryan Shawcross in the 39th minute. 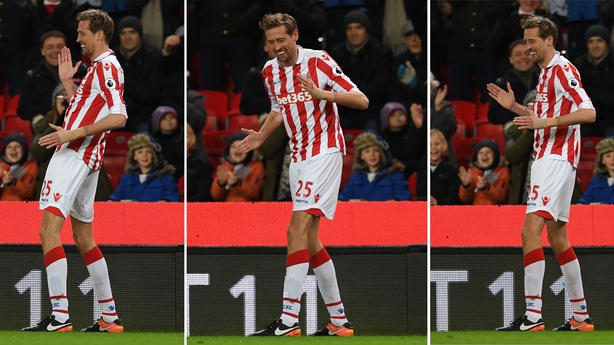 New Stoke signing Saido Berahino came off the bench for his debut in the second half and saw an effort cleared away by Ramiro Funes Mori late on, and home goalkeeper Lee Grant subsequently made an excellent save to keep out a Tom Davies header.

The point apiece sees seventh-placed Everton and Stoke, who are up to ninth, extend their unbeaten runs to six and four league games respectively.

With neither club having been involved in the FA Cup fourth round, there had been an 11-day gap between this contest and their last outings.

And it was Stoke who looked to be feeling the benefits of a rest early on as they settled quickly and grabbed the lead via Crouch.

Arnautovic latched on to Charlie Adam's long pass and squared the ball to Crouch, who slotted home a simple finish before celebrating his milestone with his well-known 'robot' routine, much to the delight of his team-mates and the Stoke fans.

While Everton struggled to offer much in response, with Romelu Lukaku dragging a shot wide, Crouch - who turned 36 on Monday - looked very much in the mood, having a header saved by Joel Robles and then drilling a firm effort just the wrong side of the Spaniard's post.

Robles then rushed out to block a shot from Arnautovic as Stoke continued to exert pressure.

But the hosts saw their lead disappear just before the break due to a goal it initially appeared would not be awarded, with the flag going up when Coleman struck the ball and it ended up in the net.

A few moments later referee Craig Pawson, after speaking to his assistant, signalled that it was a goal, and replays of the incident showed that, while Lukaku may have been in an offside position, it was not he but Shawcross who the ball had hit on its way in.

Arnautovic was presented with another chance just before the interval, but Robles again thwarted him, then just about did enough to ensure he was not left red-faced shortly after the break as Adam tried another one of his spectacular strikes from near the halfway line.

Crouch headed wide and was then joined in attack by Berahino as he came on for his bow.

Everton reacted by bringing on a January signing of their own in Ademola Lookman, and the teenager soon brought a good near-post save out of Grant with a low strike.

Berahino lifted the ball over Robles in the 84th minute but Funes Mori was there to head it away before it crossed the line, and Grant then pulled off a superb stop to deny Davies, with Lookman firing the loose ball wide.