Jack Byrne made a last-gasp transfer deadline day move to Wigan Athletic and the Ireland Under-21 international is relishing the chance to get his career moving forward following a stagnant six months at Blackburn Rovers.

The attacking midfielder spent the first half of the season on loan at Ewood Park, where he spent most of his time on the bench, but the Dubliner penned a permanent move to Wigan in the final hours of the January window.

Wigan manager Warren Joyce, who was reserve team manager at Manchester United for the past eight years before taking over at the Championship club in November, considerably strengthened his squad on the final day of the transfer window, with the Byrne deal being completed late on Tuesday night.

Delighted to sign for @LaticsOfficial al ???? Thanks to the club and the manager for the opportunity can't wait to get going now ???? pic.twitter.com/9Mt0DJqgxG

“It’s been a long day but I’m delighted to get it over the line and I’m looking forward to getting started under Warren [Joyce],” Byrne told Latics PlayerHD.

“He played a huge part in me joining this club. His record at Manchester United speaks for itself and when I spoke to him I got a really good feel for the club.”

Byrne joined Manchester City as a 15-year-old and while never making a senior appearance at the Etihad, the midfielder impressed on a season-long loan at Dutch top flight side Cambuur for the 2015-16 season.

His first-team experience in Holland, combined with several impressive outings for the Ireland Under-21 side resulted in Byrne being called up to train with Martin O’Neill’s squad in the months ahead of Euro 2016.

The summer loan move to Ewood Park expected Byrne to make a name for himself in the Championship but the gifted left-footed player only made a handful appearances at Rovers. 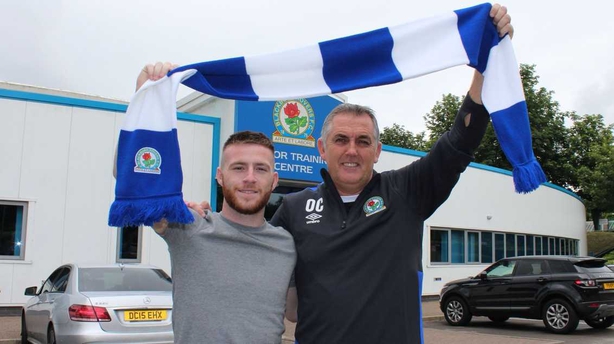 “I moved over to Manchester City when I was only 15 and I enjoyed a loan spell over in Holland the year before last. I went to Blackburn Rovers earlier this season now but I’m here now and I’m happy,” explained Byrne.

“I know James McClean very well and I spoke to him before coming here. He couldn’t speak highly enough of the club and he gave me a good feel when I spoke to him.”

Byrne now finds himself with another struggling Championship club and was one of eight new faces brought into the DW Stadium in an attempt to escape from the relegation zone, where they currently sit three points from safety, and level on points with Byrne’s former club Blackburn.

But Byrne believes that his style will suit the new club and looks forward to helping his new side to remain in England’s second tier.

“I’m a small, technical player who likes to get on the ball, but I’ll never shy away from the ball and I’ll always look to find a pass be that in the first minute or the last,” said Byrne.

“I would have liked to have played a little bit more at Blackburn but circumstances didn’t allow that. I’m looking forward to kicking on with Wigan now though.

“I haven’t played much recently with the window and everything, but I’m fit and I’m raring to go.”

Byrne could make his debut for his new club on Friday night as Wigan take on Sheffield Wednesday at the DW Stadium.