Sam Allardyce finally tasted victory in his sixth league match as Crystal Palace manager as his team took a step towards safety with a 2-0 win at Bournemouth.

Scott Dann put Palace in front a minute after halftime after Damien Delaney had flicked on Jason Puncheon's cross.

After withstanding intense second-half pressure from Bournemouth, Christian Benteke made sure of all three points when he headed in a cross from substitute Andros Townsend.

Palace, who gave a debut to wing back to Patrick van Aanholt, signed on Monday from relegation rivals Sunderland, had gone closest in an uninspiring first half.

Sam Vokes grabbed a late winner as Burnley added to champions Leicester City's away woes with a 1-0 victory.

With the match seemingly heading to a draw, Vokes hooked home from close range off a headed knockdown from Michael Keane to secure Burnley's fifth successive home win.

Burnley have taken all but one of their 29 points at Turf Moor this season while Leicester have yet to win away from home in the current campaign and are slipping perilously close to the drop zone.

Leicester are 16th, level on points with Swansea below them and just two clear of the relegation places. They now have the worst record after 23 games by reigning top-flight champions. 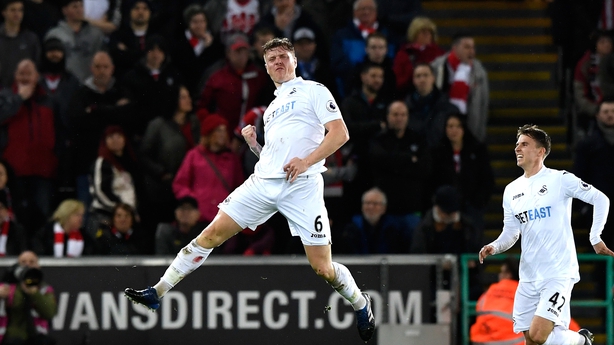 Gylfi Sigurdsson scored a second-half winner as Swansea savoured a 2-1 home victory over Southampton that kept the Welsh side two points clear of the drop zone.

The Iceland international struck in the 70th minute with a left-footed shot to restore the home side's advantage after Shane Long had equalised from close range in the 57th.

Centre-back Alfie Mawson had headed Swansea in front in the 38th minute off a Sigurdsson cross following a corner.

The victory was resurgent Swansea's third in four league games, and their first back-to-back success of the season, leaving new manager Paul Clement's side in 17th place with 21 points. Southampton are 12th.

Alvaro Negredo's penalty helped Middlesbrough battle back to earn a 1-1 draw with West Bromwich Albion but once again Boro struggled in front of goal at the Riverside as their winless streak stretched to six league games.

On a rainy night, James Morrison thumped a low shot past Victor Valdes to put West Brom ahead after just six minutes, but Negredo equalised 11 minutes later from the penalty spot after being brought down clumsily by Gareth McAuley.

The lowest scorers in the Premier League this season with 19 goals in 23 games, Boro again struggled to find the target and West Brom came closest to a winner, Matt Phillips hitting the post with a second-half header.

At home to Stoke in their next game, West Brom are in eighth position on 33 points, while Middlesbrough hover above the relegation zone in 15th place on 21 points.