Son Heung-min scored in the seventh minute of stoppage time as Tottenham completed an incredible 4-3 comeback victory against a spirited Wycombe in the fourth round of the FA Cup.

The League Two team led 2-0 at the interval, courtesy of a double by captain Paul Hayes, before leading 3-2 with only six minutes of normal time remaining. Garry Thompson grabbed the visitors' third after Son and substitute Vincent Janssen, from the spot, had got Spurs level.

But substitute Dele Alli struck in the 89th minute to haul Spurs level again before Son scored with virtually the final kick of the game at White Hart Lane.

Wycombe, 70 league places below Spurs, showed no signs of being intimidated by their more illustrious opponents here. Indeed they signalled their intent from the very first exchanges, and could have opened the scoring inside 60 seconds. 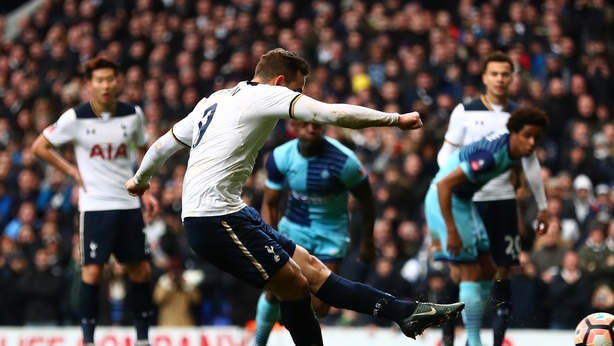 A mix-up on Tottenham's left allowed Wanderers full-back Sido Jombati to whip an exquisite cross into their box. Ready to meet it was the daunting figure of Adebayo Akinfenwa - the 16-stone striker nicknamed 'The Beast' - whose header fell into the path of Hayes.The Wycombe captain was unmarked in the six-yard box, but his effort hit the bar.

It should have come as a warning for a Tottenham side with nine changes from the one which drew with Manchester City, but acted only as encouragement for the visitors.

Spurs were struggling to get a foothold in the game, and it was Wycombe who were deservedly ahead midway through the first half. Hayes' half-volley from outside the box was tipped round the post by a diving Michel Vorm, Josh Onomah did not deal with the resulting corner and Hayes rifled it home to open the scoring.

It was a fine finish from a 33-year-old, who has played for Scunthorpe, Barnsley, Preston and Brentford, but never troubled the Premier League. This was his big moment, and it was to get even better nine minutes from the interval.

Akinfenwa, another specialist of the lower leagues and a constant menace to the home defence, won the ball inside the Spurs' half before his neat pass fell into the path of Sam Wood.

Cameron Carter-Vickers hauled him down in the area and referee Roger East had no hesitation in pointing to the spot. Wycombe boss Gareth Ainsworth could not watch the resulting spot-kick, but he was soon celebrating as Hayes made no mistake from 12 yards. 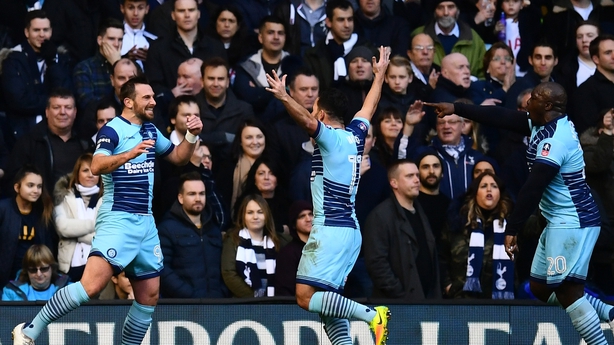 Spurs had a handful of chances in the first half - notably Moussa Sissoko seeing his effort cleared off the line by man of the moment Hayes - but for Wycombe the two-goal margin did not flatter them.

Tottenham spent the first 15 minutes of the second half struggling to create any clear-cut opportunities, but with an hour on the clock this enthralling cup tie took the first of many twists.

First, Son hauled one back when his deflected effort beat Wycombe goalkeeper Jamal Blackman at his near post. Then, with Alli and Mousa Dembele both introduced, Kevin Wimmer - another second-half replacement - was blocked by Aaron Pierre in the area. Referee East awarded a penalty, which Janssen duly converted.

After two goals in four minutes, a third seemed inevitable, but Spurs were forced to play the remaining 20 minutes with 10 men after Kieran Trippier landed awkwardly and could not continue.

It acted as a leveller, and suddenly Wycombe found themselves back in the lead after Thompson converted Myles Weston's perfect cross after 84 minutes.

The Chairboys looked on course to celebrate a famous victory only for Alli to spoil their party when he side-footed past Blackman before Son's effort in the 96th minute sealed a remarkable fightback.