Manchester United reached the EFL Cup final despite making a meal of a straightforward-looking clash against Hull and losing their 17-match unbeaten run in the process.

Southampton await at Wembley on February 26 but Jose Mourinho's men will need to produce a far better display in the capital after losing this semi-final second leg at relegation-threatened City.

Tom Huddlestone's penalty was cancelled out by Paul Pogba, only for full debutant Oumar Niasse to give much-changed Hull a shock 2-1 win at the sparsely-filled KCOM Stadium, albeit with United progressing 3-2 on aggregate.

Cup fever had been conspicuous by its absence in the build-up to Thursday's match, with just 16,831 in attendance due to home fans' anger at the club's ownership rather than United's two-goal advantage.

Marco Silva's heavily-changed side for Hull's first home EFL Cup semi-final seemed to justify the decision to stay away, but the match did not go to script as the hosts impressed and went ahead through Huddlestone's penalty.

Mourinho's frustration at referee Jon Moss' decision to point to the spot only grew as his own side were denied penalties, although United's complacent stars had a lot to answer for.

Pogba, the world's most expensive player, prodded home to the audible relief of the travelling masses, who continued to cheer despite United's' undefeated run in all competitions coming to a halt. 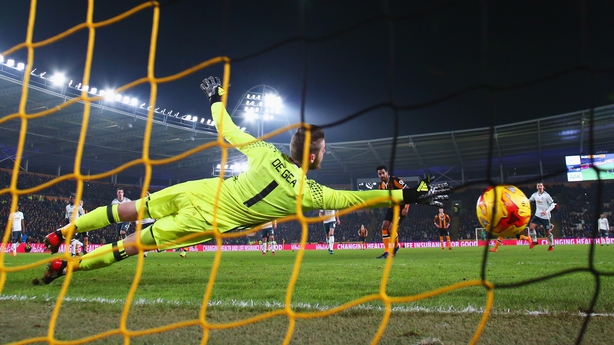 Niasse turned in at the back post to set up a grandstand finish, but it is Mourinho's men who are heading to Wembley despite a listless display in East Yorkshire.

There was a distinct testimonial feel around the second leg in the early stages.

Play lacked intensity and excitement as the United supporters made themselves heard, with the chants only pausing when Harry Maguire flashed a shot over and Sam Clucas' free-kick forced David De Gea into a simple save.

United were going through the motions aside from Marcos Rojo's deflected half chance and a threatening Zlatan Ibrahimovic cross, whereas a makeshift City were beginning to show signs of life.

As the fans stood to applaud the badly injured Ryan Mason in the 25th minute, Michael Dawson was denied by an excellent Chris Smalling intervention before Niasse was denied by De Gea.

Shaun Maloney missed with a free-kick as Hull continued to threaten underperforming United, who were punished for their lacklustre display in the 35th minute. 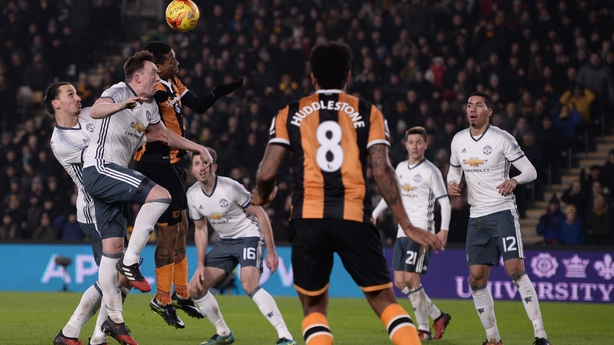 Referee Moss controversially pointed to the spot after Rojo was adjudged to have fouled Maguire, with Huddlestone firing home the resulting spot-kick to give Hull hope.

The fine reactions of David Marshall prevented Ibrahimovic from cancelling out the second-leg lead, with Jesse Lingard then sending a difficult effort dribbling wide at the end of a miserable first half from United.

Mourinho was furious as Pogba went down claiming a penalty against Dawson but to no avail - anger that grew when Smalling went down under pressure from Huddlestone.

Marcus Rashford was the next player to see spot-kick appeals fall on deaf ears, before Dawson blocked Ander Herrera's effort on goal.

The 3,743 travelling fans again made their feelings known, but frustration made way for relief in the 66th minute.

Rashford was denied by a Huddlestone tackle, only for the midfielder to turn into the path of Pogba to direct home through a crowd.

It was a gut punch that was nearly worsened by Rojo, who found room at a corner to get away a header that hit the crossbar.

Hull's Wembley dreams were looking bleak but they continued to threaten, with Abel Hernandez being blocked before Niasse hit the crossbar with a fine header.

Niasse directed home a David Meyler cross at the far post to set up a nervy ending, but there was not enough in the tank to prevent United reaching Wembley.