Ryan Mason's family has thanked well-wishers for their support following a "traumatic 24 hours" after the Hull midfielder underwent surgery on a fractured skull on Sunday.

The 25-year-old was carried off and received oxygen after a clash of heads with Chelsea's Gary Cahill in the first half of Hull's 2-0 loss at Stamford Bridge on Sunday.

He had an operation at St Mary's Hospital in London later in the evening and Hull confirmed on Monday that Mason was conscious and communicating having been visited by captain Michael Dawson and three club officials.

The England international will remain in hospital "over the coming days" and his family praised the help given, with brain injury charity Headway also saying the on-field treatment was "exemplary".

"We would like to take this opportunity to express our sincere thanks and gratitude for the overwhelming support shown to Ryan during what has been an extremely traumatic 24 hours," the family statement read.

"The well wishes and support that we've received as a family from such a large number of players, managers, clubs, fans and everyone involved in football - as well as even from people outside of the sport - has helped to give Ryan and all of the family great strength during this incredibly difficult time.

"We would also like to send a special thank you to the superb medical teams at Hull City, Chelsea and St Mary's Hospital.

"The manner in which the situation was handled and dealt with was impeccable and we are incredibly grateful for everything that they have done and continue to do.

"As has been confirmed in the statement released by Hull City, Ryan is in a stable condition and will be continually monitored over the coming days.

"The club will continue to provide regular updates as and when there is news to report. Thank you."

Earlier on Monday, the Tigers said in their own statement that Mason had been visited by Dawson and members of the backroom staff. 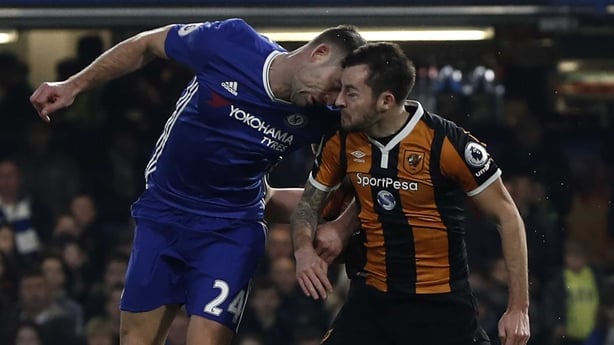 "Ryan has been speaking of the incident yesterday and will continue to be monitored at the hospital over the coming days where the club will remain in close contact with Ryan, his family and the staff at St Mary's."

Mason received treatment for around nine minutes on the field and has been the subject of messages of support from many of his fellow professionals, his former club Spurs and the Football Association.

Press Association Sport understands the trio spent time with members of Mason's family who had attended the game, which was marred by the incident in the 14th minute.

Headway chief executive Peter McCabe said: "I was actually at the match and, while it was upsetting to witness the incident, it was encouraging to see the exemplary reaction of the medical teams.

"Headway has been critical of the way in which head injuries have been treated in many high-profile football incidents in recent years, but it is positive to see that lessons appear to have been learned."

The FA has not been made aware of any issues in the way the incident was handled and has contacted Hull to offer its support to Mason.

Professional Footballers' Association deputy chief executive John Bramhall told Press Association Sport: "There's been a lot of work done over the past few years to raise awareness of head injuries, concussions and the importance to treat them with the utmost urgency.

"That was a good example of the level or standard you'd hope to expect."

England defender Cahill had been assessed for some time during the break in play as Mason was attended to.

Headway did not reference Cahill in its statement and it is not possible to make head injury assessments from afar.

The charity last September questioned whether concussion protocols were being observed in football, calling for an independent review after an incident involving Manchester United's Anthony Martial.

Headway's concerns surrounded whether rules introduced in August 2014 were being applied, not specifically the treatment of Martial.

The regulations include the employment of a third 'tunnel doctor', or medical coordinator, to help team medics identify concussions and determine whether a player is fit to continue.

Headway favours an approach where, if there is any doubt over a player's fitness to continue, they are withdrawn from the action.