Liverpool's Sadio Mane struck again as Senegal sailed into the quarter-finals of the African Nations Cup with a comfortable 2-0 victory over Zimbabwe.

Goals from Mane and Henri Saivet ensured the 2002 finalists would progress from Group B with their final match against Algeria to spare, but the margin of victory should have been much larger.

Senegal, who defeated Tunisia in their opening Group B match, started very brightly and twice went close to scoring through Keita Balde and Mame Biram Diouf before Mane put them ahead after nine minutes.

Senegal won the ball back in midfield with Keita, who sent Saivet free down the left. His shot across the goalkeeper was going wide but the ball rolled perfectly into the path of Mane at the far post to tap into an empty net for his second goal of the tournament.

Senegal had only to wait four more minutes to extend their lead as Saivet whipped a lovely curling free-kick over the defensive wall and into the net from 25 yards out. 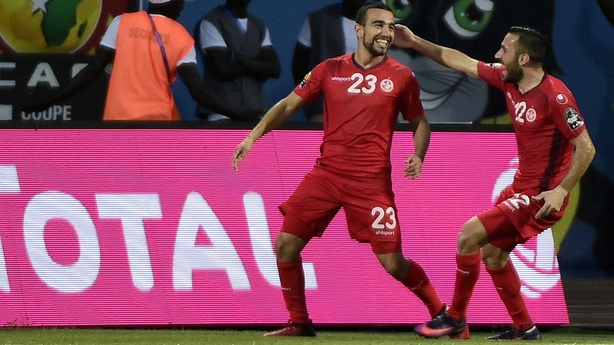 In the group's other game two defensive howlers left Algeria on the brink of elimination as they lost 2-1 to neighbours Tunisia in Gabon.

Captain Aissa Mandi scored an own goal and Napoli defender Faouzi Ghoulam gave away a penalty that was converted by Naim Sliti (above left) in a horror second half for Algeria as Tunisia rebounded from their defeat at the hands of Senegal on Sunday.

Sofiane Hanni pulled a goal back a minute into stoppage time for Algeria, but it came too late for them to mount a comeback.

Algeria, among the pre-tournament favourites, have one point and face Senegal next week, while Tunisia moved up to three points ahead of their final group game against Zimbabwe.