Shane Long spared Southampton's blushes by bundling the Premier League side past Norwich in a last-gasp 1-0 win in Wednesday's FA Cup third round replay.

The underwhelming Saints struggled for rhythm all night, but finally squeezed past Championship outfit Norwich inside normal time, after the 2-2 draw at Carrow Road on January 7.

Southampton will now host Arsenal in the fourth round at St Mary's on Saturday, January 28.

Former Norwich forward Nathan Redmond spurned three fine second-half chances as this tie looked to be heading for extra-time, only for Long to produce his rescue act.

A dire first-half served up just one morsel for the paltry and wholly-underwhelmed crowd.

Sam McQueen's shot was tipped onto the post by McGovern, before bouncing to safety. 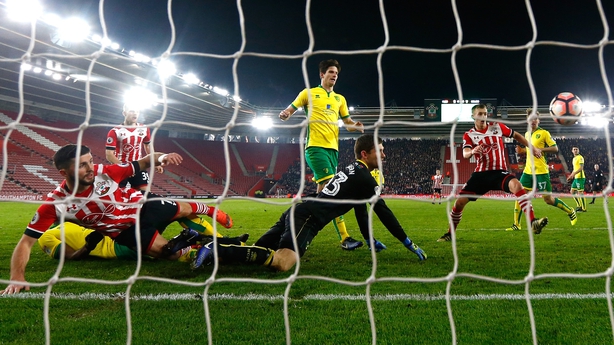 Cuco Martina and Josh Sims grafted manfully enough down the right, but to entirely no avail.

The hosts upped the tempo after the break, but that was hardly any challenge.

Sims' low cross forced Ivo Pinto to turn the ball round the post, before Rodriguez flicked the ball across the face of goal.

Kyle Lafferty just failed to connect with Josh Murphy's teasing cross though, letting the home side comfortably off the hook.

James Ward-Prowse curled a smart free-kick just wide, with the rippling netting tricking the home faithful into thinking the midfielder had made the breakthrough.

Replacement and ex-Norwich man Redmond then fluffed three fine openings for victory, all in the final stages.

First he failed to dig the ball properly from under his feet with a shot, then he fired too close to McGovern. And most wasteful of all, he scuffed wide from the penalty spot.

Long failed to gain any purchase attempting a header on Redmond's cross, as Saints finally found fluency at the death.

And just when the clash looked odds-on for extra time, McQueen's cross let Long grind the ball finally over the line for the winner. 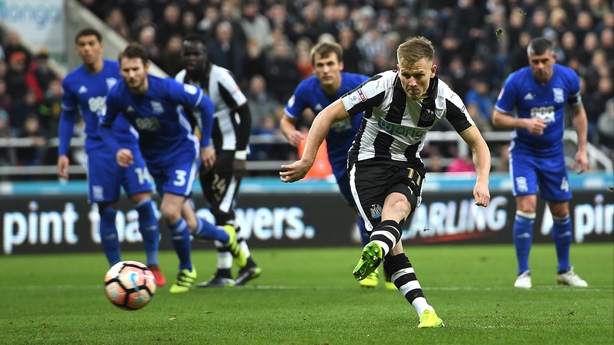 Elsewhere tonight, Jonjo Shelvey returned from his five-game ban to mastermind Newcastle's progression to the fourth round with a 3-1 replay victory over Birmingham.

The England international midfielder, who was convicted of using racially aggravated language towards Wolves midfielder Romain Saiss last month despite his denials, reminded manager Rafael Benitez of what he had been missing as the Magpies booked a trip to League One Oxford in the next round.

Matt Ritchie's early penalty and Yoan Gouffran's sixth goal of the season did the damage in front of a crowd of 34,896 as talk of a brewing transfer battle between Benitez and owner Mike Ashley was forgotten, although David Cotterill's late strike set up a tense conclusion before Ritchie struck at the death.