Marko Arnautovic tore Sunderland to shreds as Stoke powered their way to their first win at the Stadium of Light.

The Austria international fired the Potters into a 2-0 lead with just 22 minutes gone and Peter Crouch added a third - his 50th for the club - on a bad afternoon for Black Cats keeper Vito Mannone to secure Premier League victory on Wearside for the first time since 1994.

Jermain Defoe pulled one back for the home side before half-time to spark an improved second-half display, but manager David Moyes could only look on helplessly as chants of "Are you watching, Ellis Short?" rang around the stadium amid a 3-1 Stoke victory.

Injuries - in particular to England Under-21s keeper Jordan Pickford - and African Nations Cup call-ups have severely depleted Moyes' squad and with little cash available to strengthen this month, the outlook on Wearside appears bleaker than ever.

At the end of a week which saw Sunderland rebuff a bid from Crystal Palace for full-back Patrick van Aanholt days after having to fend off West Ham's interest in Defoe, the Scot might have been relieved to be able top focus on football once again. 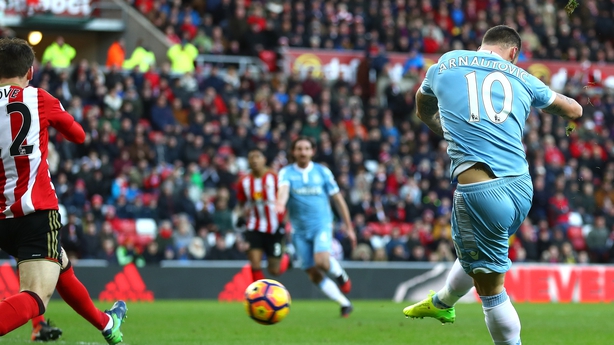 However, his best-laid plans were left in tatters inside 34 disastrous first-half minutes as Stoke capitalised on shambolic defending with Mannone particularly culpable.

The Italian managed to block Arnautovic's initial 15th-minute shot with his foot, but could only return the ball to the Austrian, who gleefully thumped it into the roof of the net at the second time of asking.

Mannone was beaten for the second time seven minutes later, but this time he was left helpless as Arnautovic carved a swathe through the home defence with a little help from his friends.

The winger exchanged passes with first Xherdan Shaqiri and then Crouch before beating the keeper at his near post to make it 2-0, and worse was to follow.

Mannone, who had fumbled a Shaqiri shot on to the post seconds earlier, decided to come for Charlie Adam's steepling 34th-minute cross, but appeared to think better of it halfway there and allowed the striker to climb above him and head into the empty net. 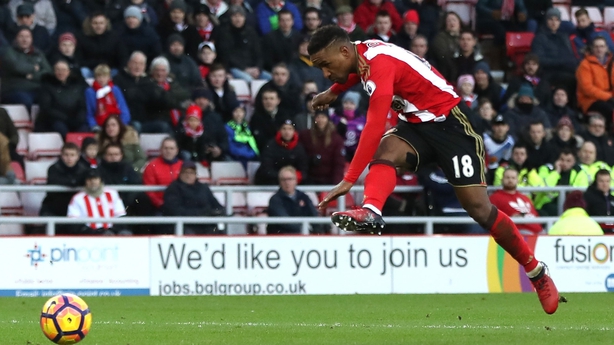 Sections of the home crowd voiced their frustration at owner Short's running of the club, although the edge was taken off their anger five minutes before the break when Defoe ran on to Donald Love's ball over the top to slot his 12th goal of the season past keeper Lee Grant.

Sunderland returned in much more positive mood and Grant had to produce a solid save to keep out Fabio Borini's 47th-minute drive, although Adam curled a free-kick just wide at the other end two minutes later.

Arnautovic came within inches of completing a fine hat-trick when he ran on to Shaqiri's superb pass and sent a shot just wide of the far post with Mannone beaten once again, but Jack Rodwell scuffed horribly wide after the ball had ricocheted to him inside the box with 61 minutes gone.

Both sides repeatedly surrendered possession cheaply as the game opened up, but Stoke coasted their way to the final whistle.