Skipper Grant Leadbitter struck for the second time in three games as 10-man Middlesbrough eased past Sheffield Wednesday 3-0 and into the FA Cup fourth round.

Leadbitter's 58th-minute free-kick finally ignited a previously dull encounter, although Boro defender Daniel Ayala was controversially dismissed for a professional foul on Fernando Forestieri within seconds to give Wednesday hope in front of a crowd of 23,661 at the Riverside Stadium.

However, the Premier League side sealed victory seven minutes later in bizarre fashion when Alvaro Negredo blocked Owls keeper Joe Wildsmith's attempted clearance and saw the ball ricochet into the net, before Marten de Roon added a third at the death.

In the most recent encounter between the teams, in last year's Sky Bet Championship, Boro completed a hard-fought double for the season courtesy of Cristhian Stuani's first-minute strike at the Riverside, which they then fought to protect for the remainder of the game.

There was equally little to choose between the sides this time around, but unfortunately, it was a lack of quality which united them during a desperately poor first half.

Effort may not have been in short supply, but precision and inspiration were as they slugged out a tepid 45 minutes during which neither keeper had a save to make and in Brad Guzan's case, not even the prospect of one.

The game had started in promising fashion when Leadbitter saw a second-minute drive blocked by full-back Daniel Pudil, but a further 25 minutes had elapsed by the time Ayala spooned a half-volley over after Wildsmith had punched Leadbitter's free-kick weakly in his direction. 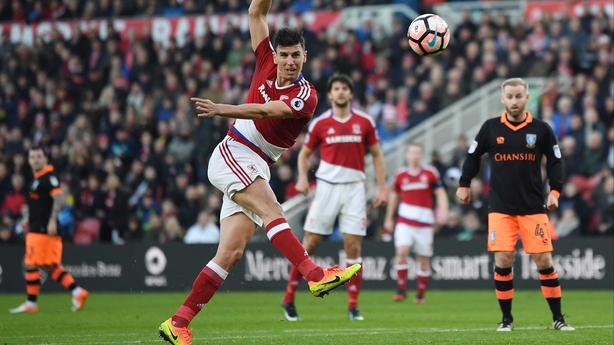 The home side tried repeatedly to find a way in through wide-men Adama Traore and Stuani, and it was the former who might have prospered 11 minutes before the break after being picked out by Negredo, although Barry Bannan was well placed to block.

For their part, the visitors made virtually no impact at the other end with Ross Wallace's 42nd-minute corner, which was eventually scrambled away by the Boro rearguard, as close as they came to interrupting Guzan's restful afternoon.

Carlos Carvalhal's men emerged with much greater urgency after the break, but it was the home side which took a 58th-minute lead when, after De Roon had been fouled by Bannan 22 yards out, Leadbitter curled the resulting free-kick expertly into Wildsmith's bottom left corner.

Boro were reduced to 10 almost immediately when Ayala was shown a straight red card for felling striker Forestieri as he headed towards goal, although replays suggested he had been harshly judged by referee David Coote.

The locals sat back uneasily in anticipation of a tense conclusion, but they need not have worried as the lead was doubled with 67 minutes gone when Wildsmith blasted the ball straight at the fast-advancing Negredo to calamitous effect.

De Roon completed the job in stoppage time with an emphatic left-foot finish to deny Wednesday even a crumb of comfort.