Gaston Ramirez lashed a late chance wide to serve up a timely reminder of Middlesbrough's need for attacking reinforcements in an eminently forgettable goalless draw with Leicester at the Riverside Stadium.

The Uruguayan steered his half-volley wide from eight yards to sum up a frustrating afternoon for the hosts and give Boro boss Aitor Karanka plenty of reason to seek to finalise a deal for Aston Villa's £6million-rated Rudy Gestede.

It emerged on Monday that Villa have accepted a fee for the Benin striker and on this evidence any additional goalscoring threat will be welcomed with open arms on Teesside after a dour point which does little to ease Boro's lingering relegation concerns.

Shorn of injured pair Islam Slimani and Danny Drinkwater, as well as the suspended Jamie Vardy, Foxes boss Claudio Ranieri had cause to be happier with a point but will also rue missed opportunities from the likes of Leonardo Ulloa and Christian Fuchs.

Boro made five changes from Saturday's unfortunate defeat at Old Trafford but their new-look line-up seemed ill-equipped in a first period littered with errors from both sides, with the often dependable Ramirez the main culprit.

Boro full-back Fabio was arguably the best player on the pitch and he could have expected more when he threaded Ramirez free in the early stages, only for the Uruguayan to waste his chance due to appalling control.

Fuchs miscued a couple of early chances for the visitors while referee Robert Madley did not endear himself to the home fans by waving away penalty claims after Adama Traore fell under the challenge of Robert Huth.

Marten de Roon and Alvaro Negredo also came close for the home side but Boro were guilty of dismal distribution and almost paid for it on 40 minutes when Riyad Mahrez was only denied by Fabio's timely interception. 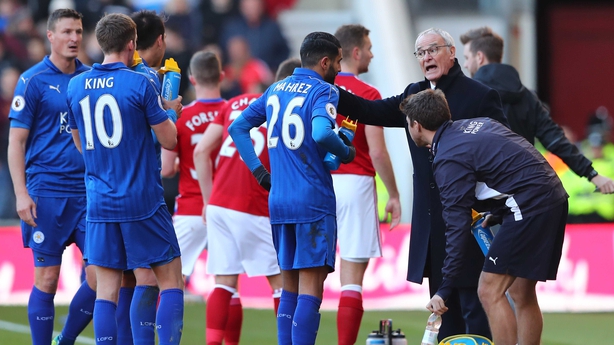 George Friend, on for the injured Antonio Barragan midway through the first half, hit the first chance of the second period straight at Kasper Schmeichel, but Leicester came closer on 56 minutes when Andy King came inches from connecting with a Mahrez cross in front of goal.

Boro's mounting frustration was underlined just past the hour mark when Friend, who alongside Fabio was providing his side with some real width, fired a low cross from the left which eluded both Negredo and the equally ineffective Ramirez in front of goal before being booted clear by Fuchs.

Ulloa headed a corner from Fuchs into the arms of Boro goalkeeper Brad Guzan then Ramirez spurned his golden chance to claim three priceless points for his side when he controlled Fabio's deflected cross only to whack it the wrong side of Schmeichel's left-hand post.

King almost caught out Guzan with a close-range header in the last minute of injury time but in truth neither side deserved to take the points from a game that offered little evidence that either of these clubs face anything other than a few uncomfortable months ahead.