Arsene Wenger praised Olivier Giroud's finish as "art" after the striker scored what could prove the goal of the season in Arsenal's 2-0 defeat of Crystal Palace.

Meeting Alexis Sanchez's cross with a masterful and stylish scorpion kick that gave Arsenal the lead, Giroud's 17th-minute strike was hailed as being of the calibre rarely achieved by predecessors Thierry Henry, Dennis Bergkamp and Robin van Persie, and reminded Wenger of those who came before him.

Ahead of Tuesday's fixture with Bournemouth and the second half of the season there was also little question the north London side are rediscovering their momentum and belief.

"He transformed that goal into art," said Wenger.

"That will be remembered as the Giroud goal that nobody will forget. Every striker is remembered for one or two or three special goals, and that will certainly remain with him forever. People come to games to see these kind of goals.

"I've been spoilt in my career because I've had many great players and many great strikers, and that is certainly in the top five (goals from an Arsenal player)." 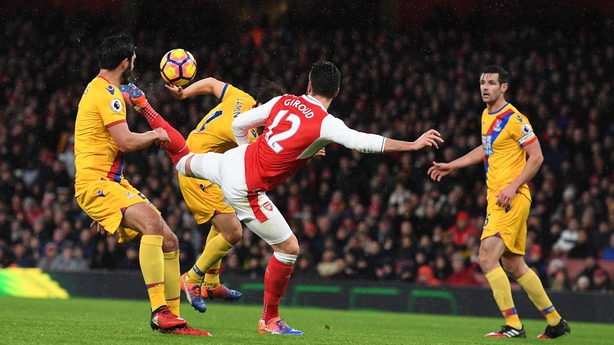 Asked of the others in his top five, Wenger responded: "I remember Bergkamp, Henry, with special goals. Bergkamp at Leicester, Newcastle; Henry at Real Madrid, against Liverpool. (Nwankwo) Kanu at Chelsea...

"It's difficult in a second to get the best five.

"Maybe what's not acknowledged by people, maybe even by me, is that Olivier scores important goals. He scored at Manchester United with a special header, against West Brom in the 86th minute.

"Overall, we always looked dangerous. The only frustration was that we didn't kill the game off early enough. When you're 1-0, 2-0, you're always under threat from a team like Palace."

Defeat leaves new Palace manager Allardyce with one point from his opening two games, and makes Tuesday's home fixture with fellow strugglers Swansea increasingly important, the timing of which the 62-year-old rued.

"We've been dealt the blow of not having enough recovery time between now and Tuesday night, why can't we play Wednesday?" he asked. "I don't know who does the fixtures but he needs sacking, really.

"Swansea played yesterday, have 24 hours on us. They're such big games with so much at stake, you want a fair crack at it, and it's unfair when you're playing (Sunday) and Tuesday night.

"I was disappointed in our first half performance (against Arsenal)

"We gave much too good possession away. None more so than the (Giroud) goal. That was simple possession given away on one of our attacks in the first half. It was a brilliant piece of skill, how he took the goal, but our passing wasn't good enough.

"Two things (need) to happen for the team to get better and produce more results: get the team fitter and buy players in. Two if possible, three if the finances will allow.

"I want to lift the squad. It lifted the whole place last year at Sunderland."