The 24-year-old Belgium international spent three years on loan from Chelsea at Atletico Madrid before displacing Petr Cech as the Blues' first-choice goalkeeper.

Courtois has since been linked with a return to Madrid, with Real, prompting suggestions he could be offered a new contract with Premier League leaders Chelsea.

"I think it's not important to clarify the situation," Conte said. "He stays with us and this is the most important thing. The other situations are only speculation.

"Thibaut is, for me, one of the best - if not the best - goalkeepers in the world.

"This season he's playing very well, and you can see that he's not only very good with his hands but also with his feet.

Chelsea, with Courtois in goal, have conceded just twice and scored 28 times in a 12-game winning run ahead of Saturday's New Year's Eve clash with Stoke.

Arsenal boss Arsene Wenger labelled Conte's side the "super-favourites" and said the title was Chelsea's to lose on Friday.

But the Italian played down the comments, pointing to the fact that the halfway point of the season follows Saturday's game.

He also says Chelsea must be on their guard to keep their winning sequence going.

"At the start of the season, not one coach, not one person, not one journalist trusted in this team to fight for the title in this league this season," Conte said.

"To have 12 wins in a row is a great achievement, but it's not enough to win the league at this point of the season.

"I'm pleased that the opinion is changing. I'm a bit worried because, when the opinion changes quickly, you must pay attention.

"We have only six points more than the second team (Liverpool), and seven from the third team (Manchester City). It's a long way before we arrive at the end of the season." 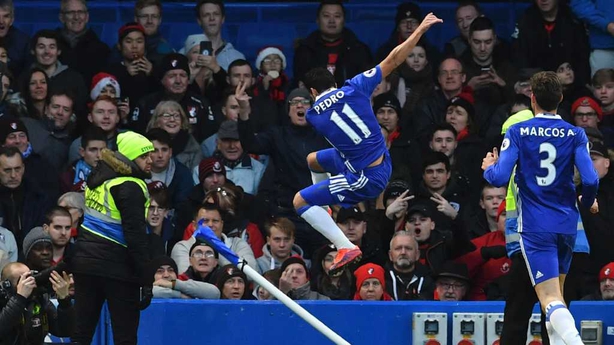 Chelsea have been fortunate with injuries this term and survived the enforced absence of striker Diego Costa and midfielder N'Golo Kante in the Stephen's Day's 3-0 defeat of Bournemouth.

Pedro is now banned, but Costa and Kante are likely to return from one-match suspensions.

Club captain John Terry is training following a gluteal strain, but is likely to have to be patient before making his competitive return.

One of the few other injuries involved Conte himself, who suffered a calf strain prior to the win over Crystal Palace, sustained while running with Steve Holland and Carlo Cudicini, two members of his coaching staff.

Conte added: "I wanted to run with them and I paid for this, because they ran very strong. Now, I'm getting better.

"During the game at Crystal Palace I suffered a lot, standing up from the bench, but now I'm getting better."

New Year's Day marks the opening of the winter transfer window and Chelsea have cash to spend after Oscar's move to China for a reported fee of around £52million.

"But there are possibilities to promote from within, with Nathaniel Chalobah, Ruben Loftus-Cheek, Charly Musonda and Kenedy all options to come into the side.

"In January it's always very difficult to buy," Conte added. "With the club we're thinking of the best way to face the rest of the season.

"For sure, we sold Oscar and we have money to spend. But it's important to spend money in the right way.

"To spend only to spend money, I don't like this. I prefer to buy players, adapt our system, people who can come into our team and pass."