Swansea appear to have missed out on their number one managerial target Chris Coleman as Alan Curtis prepares to take charge of team affairs on a "game-by-game basis".

Wales boss Coleman was the man identified by Swansea to save their season following the sacking of Bob Bradley on Tuesday.

It would have been an emotional return for Coleman, as he was born in the city and played nearly 200 games for his home town club at the start of his career.

The 46-year-old also recently received the freedom of Swansea to honour his achievement in guiding Wales to the semi-finals of Euro 2016 last summer.

But it was revealed this morning that the Football Association of Wales was relaxed over a possible Swansea approach for their manager, suggesting that Coleman is determined to see out the 2018 World Cup qualifying campaign.

Coleman has also previously stated that he never wanted to manage Swansea because of the difficulties it would cause for his family who still live in the city.

And Coleman's television presenter wife Charlotte appeared to endorse that when she tweeted, in response to a suggestion she could be moving to the Mumbles: "The mumbles are lovely but my husband has said publicly after Wales we would hopefully move abroad - but good luck to Swansea !"

Former Manchester United assistant manager Ryan Giggs has also been heavily linked with the post since Bradley's 85-day reign came to an end in the wake of the 4-1 St Stephen's Day defeat to West Ham.

But it is understood that Giggs, who was overlooked for the job when Bradley was appointed at the start of October, has distanced himself from the post and is unlikely to take up his first permanent managerial position in his native Wales.

So Gary Rowett, surprisingly sacked as Birmingham manager earlier this month, could now emerge as the favourite to take over a Swansea side currently 19th in the Premier League and four points from safety.

In the meantime, club stalwart Curtis - who was named interim manager last season after the departure of Garry Monk and the appointment of Francesco Guidolin - will be in charge of Saturday's home game against Bournemouth alongside fellow first-team coach Paul Williams.

"I have been in this situation before, it does feels a bit like Groundhog Day," Curtis said. "It is a game-to-game basis.

"Somebody could come in as we speak, tomorrow or by the weekend, but I will be in charge on Saturday and we will take it from there.

"We have a game at Palace on Tuesday and we will prepare accordingly depending on circumstances.

"We have picked the team for the weekend and we concentrate on that game." 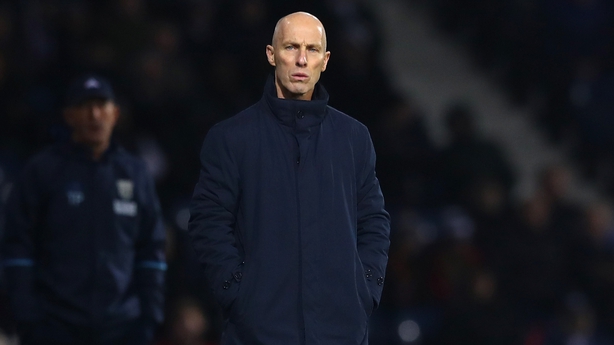 Curtis expressed sympathy for Bradley, whose 11-game reign was the joint-second shortest in Premier League history.

Swansea supporters called for Bradley to be sacked during the Hammers' horror show, and they got their wish 24 hours later.

Bradley won only two of his 11 games in charge with Swansea conceding 29 goals in the process.

"Bob was probably under pressure from the off, the fact that he was the first American to manage here with American owners," Curtis said.

"But I don't think anyone could have given any more to the club in terms of his commitment.

"He was first in to the club, usually at seven in the morning, and the last to leave at six in the evening.

"His workrate and effort was second to none, probably the best I've seen at the club."