Swansea are seeking their fifth manager in under three years after bringing Bob Bradley's sorry 85-day reign to an end.

The 58-year-old took training on Tuesday morning, but the club's American owners decided to sack Bradley after the 4-1 Stephen’s Day home defeat to West Ham had supporters calling for his dismissal.

"I knew exactly what I was getting into when I came to Swansea and realised the hardest part was always going to be getting points in the short run," Bradley told www.nbcsports.com after his departure.

"Football can be cruel and to have a chance you have to be strong.

"I wish Swansea the best and look forward to my next challenge."

Ryan Giggs has been installed as the early bookmakers' favourite to succeed Bradley at the Liberty Stadium.

But it remains to be seen whether the former Manchester United assistant manager would want to work with the Swansea hierarchy.

Giggs spoke to them when Francesco Guidolin was dismissed at the start of October, but the former Wales captain was overlooked in favour of Bradley when it was said that he had interviewed badly.

It is understood that Wales manager Chris Coleman, born in the city and a former Swansea player, has his admirers at the Liberty Stadium, while out-of-work trio Gary Rowett, Alan Pardew and Frank de Boer also feature prominently in the early betting.

First team coaches Paul Williams and Alan Curtis will take charge in the short term, with Swansea's next two games at home to Bournemouth on Saturday and away to Crystal Palace next Tuesday.

Curtis was interim manager last season between the sacking of Garry Monk and the appointment of Guidolin. 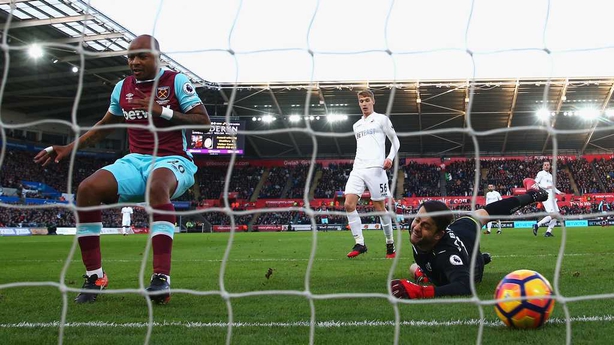 Swansea are four points from safety and the board - who were also the target of angry fans on Boxing Day - want to make a quick appointment, with the January transfer window due to open shortly.

"We are sorry to lose Bob after such a short period of time," Swansea chairman Huw Jenkins said on the official club website.

"Unfortunately things haven't worked out as planned and we felt we had to make the change with half the Premier League season remaining.

"With the club going through such a tough time, we have to try and find the answers to get ourselves out of trouble.

"Personally, I have nothing but praise for Bob.

"He is a good man; a good person who gave everything to the job.

"His work-rate is phenomenal and we wish him well for the future."

Bradley won the CONCACAF Cup in 2007 and reached the last 16 of the 2010 World Cup during his five years in as United States manager.

But he was at French Ligue 2 side Le Havre when he landed the Swansea job.

Without any Premier League experience it seemed a huge gamble, and Bradley was eventually undone by his team's inability to stop leaking goals.

Swansea lost seven times under Bradley and conceded 29 goals. They conceded at least three goals in eight of his 11 games.

Jenkins had publicly backed Bradley less than three weeks ago, saying the club had no desire to change their manager again.

But the West Ham defeat proved the final straw and left Swansea looking for a fifth permanent manager in under three years following Michael Laudrup, Monk, Guidolin and Bradley.