Liverpool's players will be feeling the burden of the weight of expectation as the club looks to end its long wait for a league title, according to Stoke boss Mark Hughes.

Hughes, who takes his team to Anfield on Tuesday evening, was part of the Manchester United side that became champions for the first time in 26 years in 1993.

It was the first of Alex Ferguson's 13 Premier League titles, coming seven years into his reign at Old Trafford, and the first step towards his aim of "knocking Liverpool off their perch" as England's most successful club.

At the time it was United's eighth title and it seemed unthinkable that Liverpool's 18th crown in 1990 would be their last. But under Ferguson, United usurped their north west rivals and currently stand alone with 20 league championships to Liverpool's 18 titles.

Do I think Liverpool can do it? Yes, they're capable

Should Liverpool go on to win the Premier League this season, it will end a 27-year wait and Hughes recalled what it was like when he was going through the same thing at United.

"Certainly when I was at United it was talked about before the season, during the season, at the end and if if you hadn't done it then it was debated again in a negative way. It was always there.

"That's maybe why, being part of that team and being able to do that, that team is remembered and revered a little bit because we were able to break that long line of difficulty of winning the league championship. 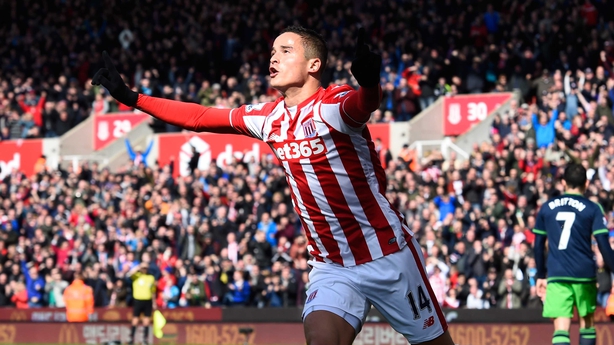 "It was about making your mark on the game and being part of that. That enabled a lot of us to make our mark at United because it had taken a lot of good teams who found it very difficult clearly."

Hughes added: "Do I think Liverpool can do it? Yes, they're capable without a doubt and they have the potential to win it.

"Liverpool will feel this is a good opportunity to get rid of that weight and have a period of success like they had in the 80s and early 90s.

"They seem to have the belief they can and it seems a really positive club again."

Ibrahim Afellay (above) is set to make his long-awaited return to the Stoke squad against Liverpool.

The Dutch midfielder has been out since suffering knee ligament damage in April but he resumed training in October and played 63 minutes for the under-23s last week and is now ready for a first-team comeback.

Marko Arnautovic is suspended and Phil Bardsley and Geoff Cameron (both knee) remain out while Jack Butland looks set for a prolonged spell on the sidelines following another operation to get to the bottom of his ankle problem.