Zaha went down inside the area in the 87th minute of Palace's 1-1 draw at Watford on St Stephen's Day, but despite contact he was booked for diving by referee Mark Clattenburg.

That denied Palace of a second penalty in the match as former England manager Allardyce had to settle for a point from his first game in charge.

Mascot Harry the Hornet got involved after the final whistle, diving at Zaha's feet when the player went to applaud the Palace fans.

"The mascot is out of order, isn't he? If someone is diving, they don't get that angry," Allardyce said.

According to several national newspapers, he then suggested there might be consequences for the mascot.

"That's up to Watford to sort that out, really," he said. "The Premier League and FA can look at that and do what they want to do. 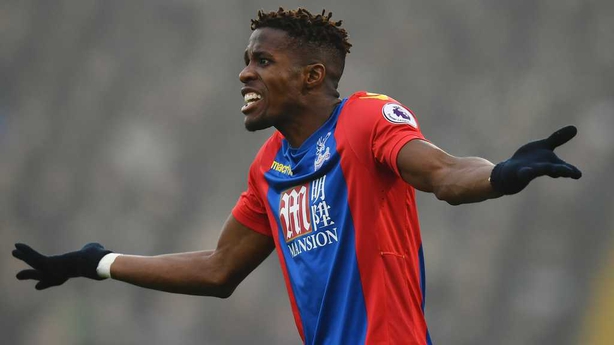 "It could have made the wrong reaction, as we know. But I didn't see it. I'm more concerned about my team, the overall performance."

Allardyce had no doubts Zaha (above) should have been awarded a spot-kick.

"That was a penalty," he said. "There may be an argument that the first contact is outside the box, but it would have been difficult to judge.

"To get nothing at all, and Wilfried booked, is very disappointing."

The 24-year-old Zaha has received a number of bookings for simulation in his career.

Asked whether he felt Zaha was being judged on reputation, Allardyce said: "You'll have to ask the referees, ask (referees' chief) Mike Riley. If they are refereeing on reputation and not fact or incident, that's a black mark against them."

Palace had already been awarded one penalty in the first half, but Christian Benteke missed the chance to give them a two-goal cushion and it proved costly.

"Let's laugh altogether about this," he said. "Everything doesn't have to be a drama.

"I couldn't see (the Zaha penalty incident) from where I was standing. Believe me, I didn't see that. Or our penalty."