Liverpool manager Jurgen Klopp has already made plans to offset the loss of leading scorer Sadio Mane next month and is confident someone in his squad will step up to fill the void.

The Senegal forward, who has eight goals this season, will be available for the next three matches - at home to Stoke and Manchester City and away at Sunderland - before he joins up with his national team for the African Nations Cup in Gabon.

He could miss more than a month if, as expected, his country progress to the latter stages of the tournament and, while Klopp admits he does not have a like-for-like replacement, he does have other options.

"He's a winger, so a very offensive player, outstanding player, very good, can play in the half-space, can do everything," the German said.

"You cannot have everything, so we decided to do this. Sadio's away and we have to find solutions.

"They can be, under very specific circumstances, in the transfer market, but if not then they are in the squad.

"We have been a little bit unlucky with injuries in the wrong moments but we still can play different systems and a lot of our players are really versatile and that's what we have to use.

"For this the players need to be open and I'm sure they are open for this.

"It's another sign for a kind of confidence: if you think the only system we can play is this system, that's not like it is, but we need to really show this." 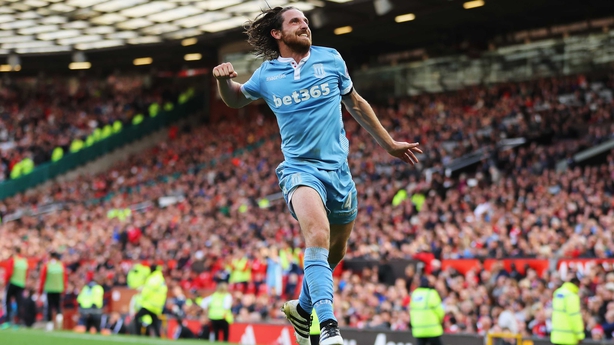 Klopp's side have an extra day to prepare for the visit of Stoke compared to their rivals, who play today, and, while the Reds boss is used to a winter break having managed in Germany, he would not want to have a break at this point with his side in the form they are.

"The good thing with having no break is you don't feel like you need a break," he added.

"So in Germany it was always like, 'Two weeks to go and then we have a break', but here nobody is in this mood.

"Everybody's on fire, we are all on the track, and that's a really good thing."

Tuesday will see the return to Anfield of Joe Allen [above] for the first time since he left in the summer.

The Wales midfielder could not hold down a regular place under Klopp despite some influential performances but the Liverpool boss has no regrets about allowing him to leave as it was for the player's benefit.

Joe Allen is for sure an outstanding player. I would say we need to keep an eye on him.

"Do we miss Joe Allen? Yes. Nice guy, unbelievably strong player, but it was kind of a common decision," he said.

"We had some conversations and it was what I could guarantee, not that Joe Allen asked me, 'How many games will I play?'

"But it was clear after the last one, two years not being a fixed player all the time.

"We all knew about his quality and when you see him playing now we are all really happy for him that he scores that many goals and he has had this big impact for Stoke.

"I'm not sure that it would have been that easy for him (here) - it's not that he doesn't have the quality, but it's about having one option more or not and using it for this or that system.

"He plays a little bit more offensive (for Stoke) than he probably would have played for us. Joe Allen is for sure an outstanding player. I would say we need to keep an eye on him."

Centre-back Joe Matip is still strugling wiht an ankle ijury and is unlikely to feature against the Potters.