Defender Zabaleta struck from close range after 33 minutes of a dull Premier League contest at the Etihad Stadium with Silva wrapping up victory four minutes from time.

But after a disappointing run, the result earned City some relief. It was their first win in four games and their first at home in the league for almost three months.

Their clean sheet - a first in nine games - was also welcomed and came after manager Pep Guardiola left defender John Stones on the bench.

Additionally, City did not have to deal with Watford's dangerman Troy Deeney until the latter stages as Walter Mazzarri appeared to prioritise the weekend game at Sunderland. 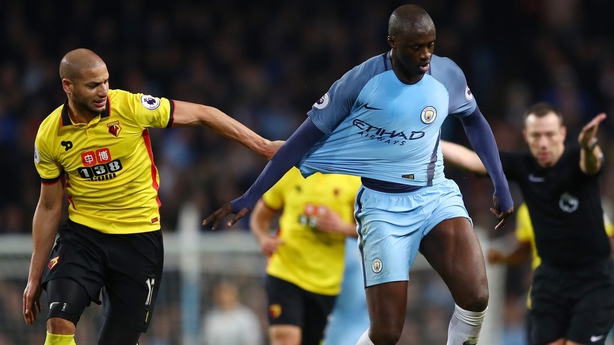 Nolito, given the chance up front in the continued absence of the suspended Sergio Aguero, headed over.
But aside from those early flourishes, the opening half was a largely sluggish affair with City dominating possession but creating few chances.

Nolito sliced a half-chance well wide and Yaya Toure drove another effort over but quality was generally lacking.

That changed just after the half-hour as De Bruyne produced some nice touches on the left and then delivered a deep cross for the inrushing Zabaleta to turn home at the back post.

City might have then looked to move through the gears but their momentum was halted by an injury to Ilkay Gundogan. The midfielder appeared to twist his knee in a tackle and, despite a determined effort, was unable to run off the knock. 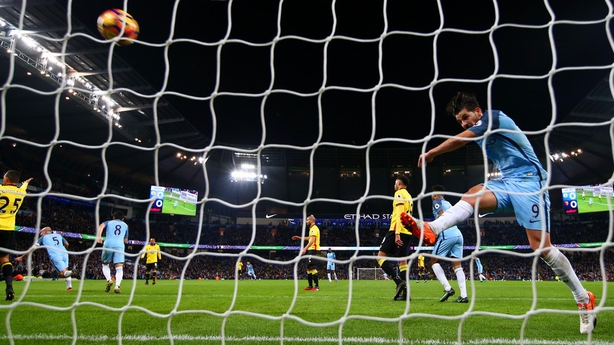 The German, who missed the start of the season with a dislocated kneecap, left the field visibly upset just before the interval.

By this time, Watford had also been forced into a change with Roberto Pereyra having hurt himself landing awkwardly and limped off moments later.

Sterling attempted to liven up the City attack in the second half. The England forward made a couple of penetrative runs, including one that ended with a shot that clipped the bar.

Sterling also won a free-kick on the right edge of the box but City were unable to take advantage in what remained a laboured performance.

With City unable to kill off the game Watford retained a glimmer of hope and they sent on Deeney for the closing 18 minutes. The Hornets almost stole an equaliser when City failed to clear a set-piece but Claudio Bravo managed to beat away Etienne Capoue's shot.

They had an even better chance 10 minutes from time when Nordin Amrabat whipped in a superb cross from the left but Ighalo sidefooted over.

City finally wrapped up the points late on after Silva robbed Adlene Guedioura and released Sterling before taking a return pass and clipping home.