Leigh Griffiths believes teams will be travelling to Celtic Park with fear this season.

The Scotland striker returned to the Hoops starting line-up against Partick Thistle at Firhill on Friday night and set up Stuart Armstrong for his double before adding a third for his 10th of the season.

Defender Liam Lindsay pulled a goal back for the Jags but Callum McGregor clinched a convincing win with with a fourth eight minutes from time.

Brendan Rodgers' side are unbeaten in 14 Ladbrokes Premiership games, having dropped only two points and with the Betfred Cup already in the trophy cabinet after beating Aberdeen in the recent Hampden final.

Hamilton visit Celtic Park on Tuesday and Griffiths believes they, like all the other teams, will arrive with a different mind-set than they did last season when Ronny Deila was boss.

He said: "It is going to be hard for teams to stop us.

"We look forward to Hamilton on Tuesday now. We are back on our home pitch and we want to make it count.

"Teams will be coming to Celtic Park fearing the worst and that's what we wanted at the start of the season.

"Last season teams were coming to Celtic Park and thinking they could get a result but now teams are going to be scared buy the way we are playing and we need to keep doing the same things."

It was Griffiths' first start since November 5 and he admitted his frustration at having to play second fiddle to Moussa Dembele.

However, he reiterated that he cannot have any complaints due to the form the France under-21 striker has shown in scoring 17 goals since joining from Fulham in the summer

Griffiths said: "I've been itching to play for a couple of weeks now and I've done myself no harm.

"I'm pleased with my 10 goals. It would have been more if I hadn't been injured, I've no doubts about that.

"Now it's all about getting a run of games and, if I do that, I'm confident I will score.

"I was in this time but we will wait and see what the manager does against Hamilton on Tuesday.

"If I'm back on the bench, then I'll have to wait my turn and give him a selection headache.

"Of course, it's hard, but I have said it before I can't fault Moussa for his efforts and goals.

"If the shoe was on the other foot and if I had scored lots of goals when he was injured and then he got into the team, I would be asking questions.

"I've had to bide my time. I got a chance here at Thistle, scored a goal, got a couple of assists, so we will see what happens next week." 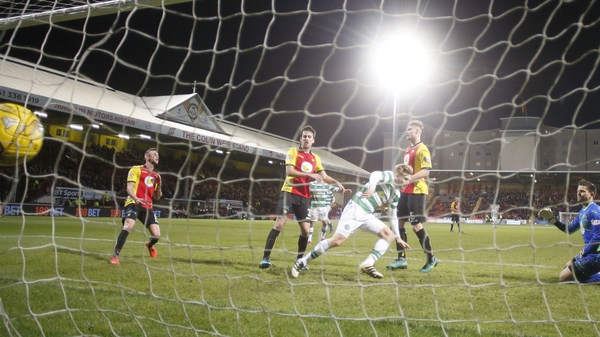