Cork City defender Alan Bennett has been named the SSE Airtricity/Soccer Writers’ Association of Ireland Player of the Month for November.

Bennett was presented with the award today by Cork City Manager John Caulfield.

The defender put in a towering performance at the heart of the City defence in the FAI Cup final against Dundalk as Caulfield’s side won the showpiece 1-0 with an extra-time goal from Seán Maguire.

Bennett insisted winning this award capped off the perfect end to the season – even if he only did play one game in November. 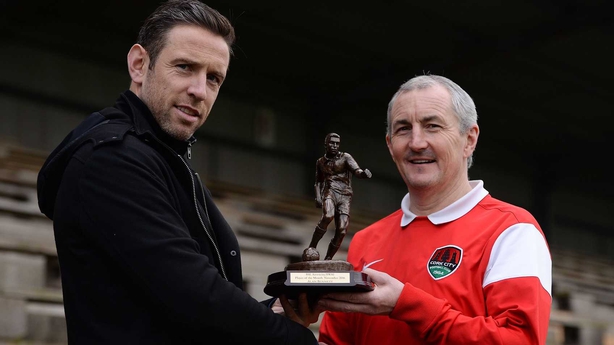 “It’s for November, yeah? So for one game? Maybe if we only play one game a month from now on I’ll do okay,” he laughed.

“I really am very proud to win this award. I’m humbled, to be honest. We finished the season exactly how we wanted to by winning the FAI Cup and to get this too caps it off.

“We’ve had a great year, Seanie (Maguire) finished as top scorer, we kept 21 clean sheets from 33 games and I think we can hold our heads up high.

“Ronan Finn got man of the match in the final so to be recognised like this is very nice. I’m already looking forward to the start of pre-season to get back into action.

“We’re back training in the first week of January and then we’ll have the President's Cup soon after. I can’t wait to get going again.”

In winning the award, Bennett beat off competition from team-mate Maguire, who finished second in the voting. Dundalk midfielder Ronan Finn was third.

The 25-year-old midfielder joins the Tribesmen from St Patrick's Athletic, where he made 23 appearances and was an EA Sports Cup winner with the Saints.