The 46-year-old was the only candidate interviewed by the Football Association after making a positive impression during a four-match stint as interim boss and was confirmed as Sam Allardyce's successor on Wednesday afternoon following a board meeting at St George's Park.

Southgate's three years in charge of the under-21s mean he is well versed with the England set-up and staff and has also worked extensively with many of the current squad, qualifications which have weighed heavier than his slender experience of club football - a solitary assignment at Middlesbrough that ended in relegation and dismissal.

Having signed his contract Southgate immediately turned to the challenges ahead, with the 2018 World Cup and 2020 European Championship in his remit.

“He’s definitely a very cool customer and he was a hell of a footballer when I played with him,” McGrath told RTÉ 2fm’s Game On.

“I’m delighted for him and his family that he’s got to the pinnacle now of English football.

“[When I played with him] he had that aura, he had that confidence to do whatever he wanted in football.

“Gareth will understand that if he doesn’t do the job he will know exactly what’s coming down the pipeline.

“Hopefully he can do well and bring the team a bit of success.”

Earlier, Southgate declared "the hard work starts now" after his long-anticipated appointment was sealed with a four-year deal.

"I am extremely proud to be appointed England manager. However, I'm also conscious that getting the job is one thing, now I want to do the job successfully," he said.

"I've thoroughly enjoyed working with the players over these past four games and I think there's huge potential. I'm determined to give everything I have to give the country a team that they're proud of and one that they're going to enjoy watching play and develop. For me, the hard work starts now."

FA chief executive Martin Glenn, who joined chairman Greg Clarke and technical director Dan Ashworth in nominating Southgate to the board, explained the qualities that persuaded the trio not to look elsewhere.

"We are delighted to confirm Gareth as England manager. He's obviously somebody we know well but it's his understanding of international football and the development set-up at St George's Park that is important," he said.

"He performed extremely well during the four games he was in temporary charge and he impressed us during a tough interview process.

"Gareth is a great ambassador for what the FA stands for, he's a very good football tactician and a leader but beneath that he's a winner and that's an important part of the job."

No formal vote was required from the 12-strong FA board so, with no opposition forthcoming and Southgate on site, the paperwork was quickly finalised.

The finer points of the contract have not been made public but it is understood he will earn around #2million a year, four times his previous salary and higher than initial forecasts, with significant performance-related bonuses available. 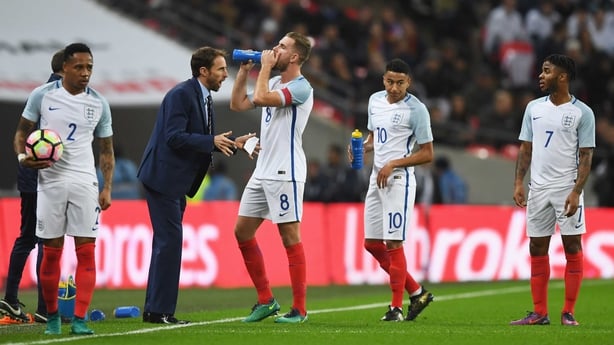 The FA has not revealed whether the terms include a break clause after the World Cup but it is expected that such provisions exist, with Glenn particularly keen to review matters after one tournament cycle.

Southgate's record during his temporary spell read won two, drawn two with seven points from a possible nine in qualifying and an entertaining 2-2 draw with Spain in a Wembley friendly.

The result that did most to strengthen his grasp on the job was a 3-0 defeat of neighbours Scotland, after which he became heir apparent.

England do not play again until March, with a friendly in Germany followed by a home qualifier against Lithuania.

Southgate, who won 57 caps between 1995 and 2004, distanced himself from the role when he was linked in the Euro 2016 autopsy but accepted the reins on a temporary basis when Allardyce was forced out by a newspaper sting one game into his tenure.

He impressed with a calm authority, dealing deftly with the media, bravely dropping captain Wayne Rooney in just his second match and garnering good feedback for his interactions with the squad.

If proof were needed that he had aced his elongated audition it came with last week's confirmation that the FA would not be meeting any other candidates.

Much of the subsequent time was instead spent debating staffing issues, with the FA eager to enlist assistant Steve Holland on a full-time basis having previously used him on a job-split basis with Chelsea.

The Blues are understood to be willing to let their employee move on but with their Premier League title challenge in full swing, would prefer to make changes at the end of the campaign.

The future of coach Sammy Lee, who was initially drafted by his close friend Allardyce and kept on during Southgate's interim stint, has also been discussed.

The FA also need to replace Southgate as under-21 boss.

Aidy Boothroyd stepped up from the under-20s when Southgate took charge of the senior squad, winning both games to qualify for Euro 2017, but is not guaranteed to continue, with the FA open to other ideas.