Manager Arsene Wenger admits Arsenal have only a 10% chance of achieving their goal of topping their Champions League group after being held to a draw by Paris St Germain.

The Gunners knew victory over the Ligue 1 champions at the Emirates Stadium on Wednesday night would have been enough to advance into the last 16 as group winners and theoretically secure an easier tie.

But, after Lucas Moura's late deflected header sealed a 2-2 draw for PSG, it is the French outfit who now look set to finish top of Group A, with victory at home to Ludogorets in their final fixture enough to keep them clear of Arsenal.

Edinson Cavani gave the visitors the lead before Olivier Giroud's penalty on the stroke of half-time hauled Wenger's men level - with Marco Verratti's own goal then putting Arsenal in front.

But they could not hold their lead and look destined to finish second in their group for a fifth straight season, with Wenger admitting they are unlikely to overhaul PSG, even if they win in Basel next month.

"We have 90% chance to finish second but we wanted to finish first. But at the moment we have not lost a game in this group.

"Overall, we have done the job well and will it be enough to finish first? I don't know. Will that be bad or good for us? I think we have to wait for the draw. As you look at all the groups, you cannot really guess is it good or bad.

"The advantage if you finish first is that you play the second game at home, but for me, what is more disappointing is we wanted to win the game and we didn't win it. It is disappointing."

While Arsenal remain unbeaten in all competitions since a defeat to Liverpool on the opening weekend of the Premier League season, they have drawn their last three games and Wenger believes some momentum has been lost. 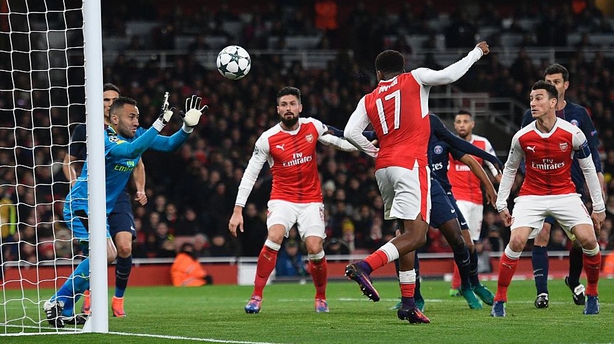 "We have not lost (a match), but we have lost a winning momentum a little bit, yes. But we played against a good team tonight as well," he added.

Arsenal have not progressed past the round of 16 stage in the last six years and, as things stand, would draw one of Juventus, Borussia Dortmund, Monaco, Atletico Madrid, Barcelona or Napoli.

PSG meanwhile, know a win over Group A minnows Ludogorets, who were humbled 6-0 at the Emirates in October, would assure them a runner-up in the next stage.

But manager Unai Emery insists that, despite the result on Wednesday, he is taking nothing for granted.
"We still have to play against Ludogorets, but we're currently top and that's important," he said.

"We deserved that in terms of the way the game went. We deserved a draw to secure top spot. Analyse the two games against Arsenal and we do deserve it."