Steven Gerrard has hinted he is leaving LA Galaxy by claiming he will "miss" the city.

The former England captain, whose future is uncertain following Galaxy's MLS play-off defeat last week, posted a picture of himself on Instagram with Los Angeles in the background.

And an emotional caption said: "Special place, incredible view, I will miss you LA. #lalaland."

Gerrard, 36, has been playing in America for the last 18 months following his exit from boyhood club Liverpool and speculation over his future has been rife since Galaxy's penalty shootout defeat to Colorado Rapids. 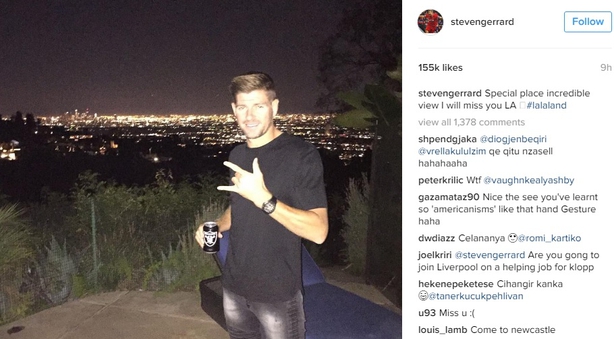 The American club are hoping that he will stay in California for another season while there were reports earlier this week that he was planning his retirement.

He has also been linked with a return to the United Kingdom, with Celtic and Newcastle reportedly interested in him, while a homecoming to Anfield has also been heavily mooted.

Gerrard has made 19 appearances for Galaxy, scoring three goals and looks certain to be leaving the StubHub Center.