Michael O'Neill credited his Northern Ireland players for once again executing his tactics to a tee as they thrilled Windsor Park with another 4-0 World Cup qualification win.

One month after defeating San Marino by that scoreline, Azerbaijan were put to the sword by a Northern Irish team inspired by Chris Brunt's first international appearance in 13 months after a long knee injury lay-off.

He scored one and created another, with Kyle Lafferty, Gareth McAuley and Conor McLaughlin also among the goals, as the previously unbeaten Azeris ceded second spot to their conquerors in the race to finish directly behind Germany in Group C.

"We'd emphasised that it wouldn't be as straightforward as San Marino, we had too much respect for Azerbaijan," O'Neill said.

"But we knew if we got forward in the right areas and crossed the ball we could cause them problems and that was the case, whether it was from open play or set-pieces.

"It was a good night. The players are very well drilled to their credit, but they don't get bored with the repetition, that's key to good players, they embrace it. We couldn't have asked for anything more on the night." 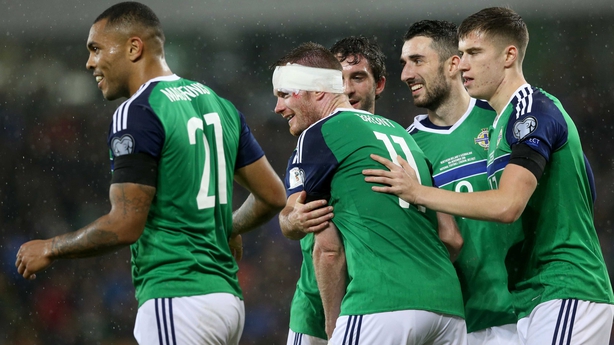 The Green and White Army's tongue-in-cheek suggestion O'Neill's side will end up topping the group ahead of Germany brought a smile from their country's manager, particularly after the world champions' 8-0 demolition of San Marino.

But Northern Ireland will at least enter the new year in second ahead of Azerbaijan, the Czech Republic and Norway, with the latter due to visit Belfast in March and O'Neill hopeful some of the contenders will soon fall away.

"We've had a good start to the group - seven points from four games and we've been to Germany and the Czech Republic," O'Neill added.

"We now have a massive home game in March, a win will put us a good distance ahead of Norway, and Azerbaijan will play Germany.

"As opposed to possibly four teams to go (for qualification) with Germany, it may lessen. The fifth game is always crucial, once you get to 10 points you're in touching distance to get enough points to possibly get there, that's what we have to aim to do.

"We've been very good at home, not only in this campaign but in the previous campaign, and the fact the next game is here is a bonus as well."

Azerbaijan arrived in Belfast as one of just four European countries yet to concede in the opening three games, but that record fell in empathic fashion, though boss Robert Prosinecki elected to look at the bigger picture.

"I think we are a good team, that's hard to say after we've been beaten 4-0, but I still think we have a lot of talent," he said.

"We had two chances to score and didn't take them. We certainly weren't over-run but Northern Ireland played well from set-pieces. They are super with their heads and they wanted to win the ball.

"We could have done more up front but it's not a matter of despair, we have seven points from four games, three away from home, so it's all to play for."