A frustrated Charlie Adam has criticised the decision to bring Scott Brown back into the Scotland squad less than three months after he announced his international retirement.

Brown has admitted his Scotland comeback might only be for Friday's World Cup qualifier against England and Adam - who was again omitted from Gordon Strachan's squad - claims that is unfair on the other players.

Strachan canvassed opinion from several players before naming Brown in his Wembley squad but Adam feels it was a strange decision from the Scotland manager.

The Stoke midfielder was speaking on TalkSPORT hours after expressing his frustration with his continuing exclusion from the Scotland squad on BBC Radio 5 Live.

The 30-year-old, who claimed his "face doesn't fit" and criticised the lack of communication from Strachan, said of Brown's comeback: "If I was in the position where I'd travelled to Malta and Slovakia and he just came straight back in to play against England, I'm going to be thinking: 'What's going on, why am I not getting an opportunity?'. 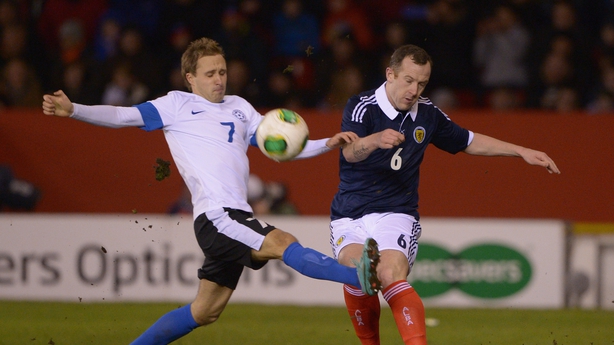 "I understand he's got 50 caps and he's done well for his country, but once you retire, let somebody else have an opportunity, because they've been waiting for an opportunity for a long time. If he's only going to come back for one game I don't feel it's right for the other players who are sat on the bench.

Adam has not played for his country since a 1-0 friendly win over Qatar in June 2015.

Asked if he had upset Strachan, the former Rangers and Liverpool player said: "No, nothing at all. Listen, I'm not saying I should be playing. I feel I could work my way into a squad of 23 players. That's my issue.

"If I go and I don't play, that's fair enough. I'd understand that, he picks the team. You can only show your capabilities if you are in and around the squad.

"When he turns round and he needs to make a sub, do you want someone with 25-30 caps on the bench or do you look at someone who is 18, 19 and thinking 'can I really put him on?' Yeah, you can and they are for the future, but let's be honest, it's the here and now and we're struggling. We're got four points and it's not a great situation to be in. I'm frustrated I am not in the squad."

Adam stressed he felt Strachan was the best manager available for Scotland and he insisted he would remain available for selection. Alan Hutton quit international football last week after losing his place in the team to Callum Paterson.

But Adam said: "I won't retire, I won't retire, no chance. I'm a supporter and I want to see them do well. There's no way I will retire. I've got 26 caps and I'm proud of every one of those caps."