Skipper Jordan Henderson has credited Liverpool's rise to the top of the Premier League table to the work rate of their attacking trio of Philippe Coutinho, Roberto Firmino and Sadio Mane.

Liverpool beat Watford 6-1 on Sunday to go one point clear at the top after 11 games, with all three forwards getting on the scoresheet.

Mane scored twice to take his league tally to six goals, while Coutinho and Firmino are both on five goals for the campaign after adding one apiece.

"They are world-class players," Henderson said.

"Their understanding of the game, not only going forward, but also the work rate they all give for the team in terms of pressing and winning the ball back high up the pitch."

"They all help the team defensively. The three of them are fantastic at that and going forward they are unstoppable when they are on it." 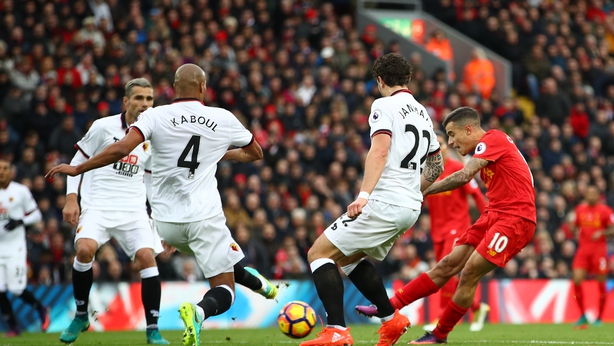 Liverpool last won the league in the 1989-90 season and have since finished second four times, most recently under Brendan Rodgers in 2013-14, when they had the inspirational Luis Suarez leading their attack.

"I don't really like comparing this team to a couple of seasons ago. I prefer to concentrate on this team and what we're good at and what we're doing. The team of 2013-14 is in the past," Henderson added.

"As a team I feel as though we have a lot of quality and in the final third they've been brilliant over the past few weeks.

"It's a pleasure to be playing with them. It's our job to ensure we offer protection for them when they are going forward and expressing themselves."

Liverpool travel to St. Mary's Stadium to face 10th-placed Southampton on 19 November when the league resumes after the international break.

In other Liverpool news, the club have signed three of their younger players to new contracts.

Kevin Stewart and Trent Alexander-Arnold have agreed deals until 2021, with reserve team striker Ben Woodburn's contract taking him up to 2019.