Stephen Kenny dusted himself down after Dundalk's 2-1 defeat to Zenit St Petersburg on Thursday night and urged his men to keep believing they will go through to the Europa League knockout stages.

Zenit manager Mircea Lucescu also tipped the underdogs to progress after his side edged  a narrow in freezing Russia.

Kenny felt his team deserved better after a double from Brazilian talisman Giuliano heaped pain on the Lilywhites in their Group D clash but predicted their journey was not over.

"We are always in the shadow of the English teams but we are emerging as a team who is forging their own identity on the European stage and a team that people are relating to across Europe," he said.

"I think they see us dealing with very small resources, overcoming the odds, coming up against some of the great European teams and matching them.

"The journey does not have to stop over the next couple of games. We still believe we can go on and qualify for the last 32."

Dundalk are still in second place after the other group tie between Holland's AZ Alkmaar and Israel's Maccabi Tel Aviv finished goalless.

The rank outsiders when the tournament began face AZ in Dublin before a stage finale in Israel.
Zenit manager Lucescu said: "The best team is Dundalk, I cannot compare them with the others.

"They can win at home against AZ and it is easy to not lose a match against Maccabi Tel Aviv."
It was a frustrating night for the League of Ireland champions after a shot from Patrick McEleney hit the crossbar and the post.

Daryl Horgan had scored a dramatic equaliser on the break after taking advantage of a misdirected header to give his tireless side hope. 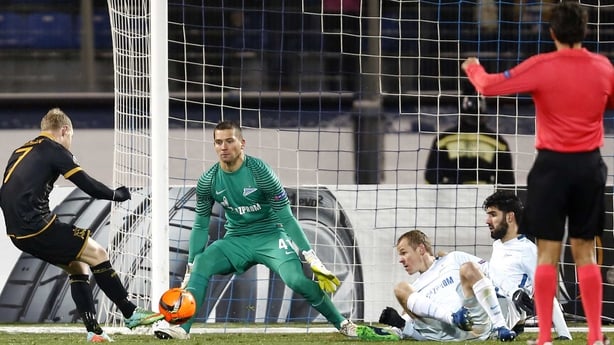 Kenny said: "We are disappointed but we can get encouragement from the performance.

"It is still in our own hands. AZ have to come to Dublin in the next few weeks and then we have to go to Israel so it looks like it will go down to the last game and the margins are very narrow so we have to wait and see."

He said Horgan's goal deserved to earn something from the game, saying his star winger showed great composure as he broke down the middle and produced a brilliant finish.

"It was Daryl's individual brilliance that got the goal," he said, before adding his hope that Zenit would not take their foot off the pedal against Maccabi and AZ now they had qualified.

"They are capable of getting maximum points from the group," he said.

"Both teams will make the games difficult but we are improving all the time, we are learning more about European football the more games we play.

"Our progress is very evident. We seem to be able to score regardless of where we go."