Brendan Rodgers insists Celtic have already exceeded outside expectations in the Champions League despite taking only two points from four Group C fixtures.

The Hoops' 1-1 draw against Borussia Monchengladbach on Tuesday night - after losing 2-0 at home to the Bundesliga outfit a fortnight ago - kept them at the bottom of the table.

After a 7-0 thrashing against Barcelona in the Nou Camp on match day one, the Scottish champions responded with a fine performance in the 3-3 home draw with Manchester City.

Celtic host Barca later in the month before visiting the Etihad stadium in December and progress in the competition or even finding a place in the Europa League remains odds-against.

However, ahead of the Ladbrokes Premiership game against Inverness on Saturday - where defender Jozo Simunovic and striker Leigh Griffiths will return to the squad - Rodgers said: "I think everyone's expectation coming into it was that we wouldn't get a point. Everyone noted the opponents we were playing, that we would be lucky to get even a point.

"Barcelona away of course we deserved nothing.

"Manchester City was an outstanding team performance, we got a point from that and great encouragement from the performance.

"We were second best on the night at home against Monchengladbach, we didn't quite get to our level.

"But our last game away we showed a good level of performance and picked up a deserved point.

"So it is game by game. A tough one the next one, but I really look forward to that and we hope to get back to that level we showed against Manchester City." 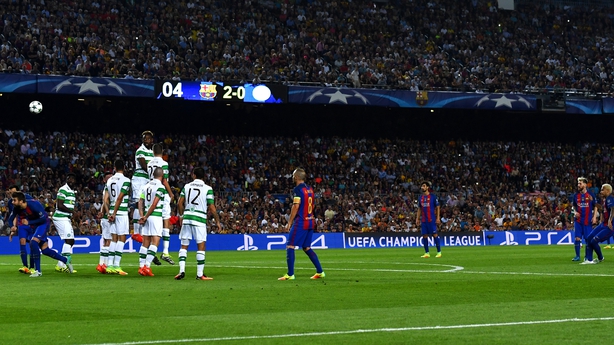 Asked if he believed Celtic would be playing European football in the New Year, the Northern Irishman said: "Win, lose or draw the next two games, it is about performance level.

"I said it was going to be a learning process for us and you can see the players are learning. We go into every game thinking we can win and that has always got to be the ambition.

"We recognise we are up against the world's best team and it will be tough for us."

Despite his admiration for Barcelona, Rodgers was not surprised by City's 3-1 win over the Catalan club on Tuesday night, which left the English side two points behind Barca at the top.

He said: "No, because they [City] are a world-class team in their own right.

"I haven't seen the game yet but again they showed at our place the top level they are at, the investment in the club and the coach [Pep Guardiola] is arguably the world's best and they have got the top players functioning very well.

"So I wasn't surprised. Barcelona have lose three times this season and Manchester City are a top team."