Leicester missed the chance to seal qualification to the knockout stages of the Champions League after a forgettable 0-0 draw in Copenhagen.

The Foxes never got going in Denmark and the hosts failed to take advantage to leave their own hopes of reaching the last 16 in doubt.

Kasper Schmeichel ensured the visitors escaped with a point when he produced a fine last-minute save from Andreas Cornelius, while Christian Fuchs cleared Benjamin Verbic's effort off the line with Leicester yet to concede in the competition this season.

Porto's 1-0 win over Club Brugge meant only a win would send the Foxes through but they lacked imagination in a sloppy, if gritty, performance as their 100% record in Europe ended.

Leicester are the first debutant team in Champions League history to not concede in their opening four games.

Copenhagen-born Schmeichel has now made two crucial late saves to thwart Cornelius, having also denied him in Leicester's home 1-0 win last month, and boss Claudio Ranieri believes the Denmark international is one of the best goalkeepers around. 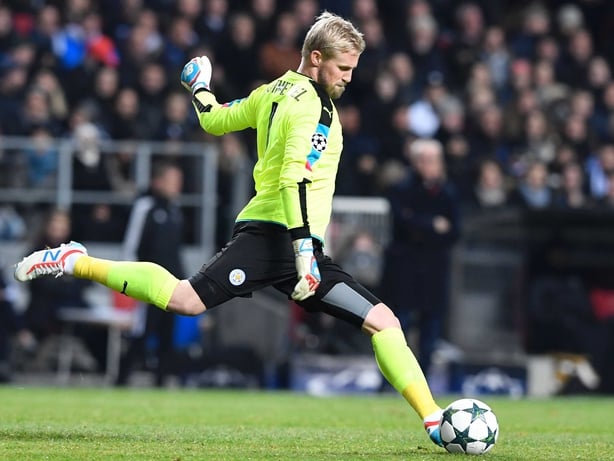 He said: "I love my players and it's difficult for me to say no. I always say yes, yes, yes. My players are the best.

"It was a very good save, if they score they win the match. Kasper is fantastic, I have coached a lot of big champions in goal, Kasper is one of these. He has had two perfect seasons.

"Kasper, this is my second year, has always made good performances. I am very calm when Kasper is in goal. He is strong, assured and commands the defensive line. He is a very good goalkeeper."

Ranieri's side still top Group G by three points ahead of Porto and will be expected to qualify for the last 16 when they host rock bottom Brugge in three weeks.

Copenhagen, unbeaten in 30 games at Parken in all competitions, bossed the majority of the game as Ranieri's tinkering backfired in the first half.

The Foxes began with three at the back, recalling defender Luis Hernandez, but never got to grips with the game as the Danish champions dominated.

I am very calm when Kasper is in goal. He is strong, assured and commands the defensive line. - Claudio Ranieri

Danny Drinkwater's shot deflected wide but it was a rare Leicester chance as Federico Santander headed over after 12 minutes and Wes Morgan blocked Verbic's strike.

As an attacking force Leicester were non-existent but coped well enough with muted pressure from the hosts although Morgan and Robert Huth were uncharacteristically unsettled.

They handled long balls with ease but both slipped up when Copenhagen attempted to attack through the middle, leaving Huth with a booking after he felled Santander.

That they still held a degree of comfort was more to do with the hosts' one dimensional efforts than any judgement from the Foxes and Santander sliced a volley wide after 29 minutes as Copenhagen continued to press without penetration.

It took 33 minutes for the Foxes to register their first shot on target when Jeff Schlupp's weak drive deflected straight at Robin Olsen but it summed up Leicester's attack on the night.

Riyad Mahrez was shackled while Ahmed Musa failed to make an impact and even a tactical switch of moving Mahrez inside behind Jamie Vardy, who has not scored in 12 appearances, failed to spark the visitors. 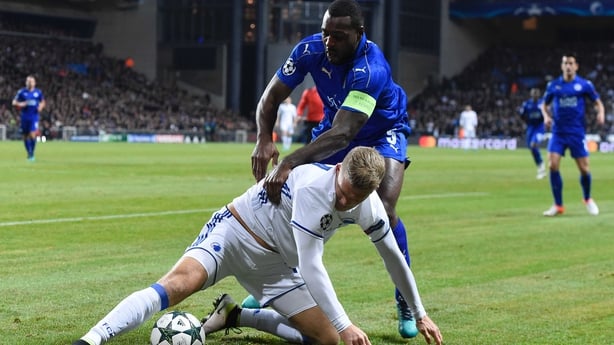 With Parken subdued the game drifted towards half-time with the hosts failing to show enough imitative to go with their territorial dominance.

Peter Ankersen and Daniel Amartey shared pot shots and Drinkwater's cross fizzed across the face of goal in the second half but it took until the 59th minute for another real chance.

It was the best opening of the game as Santander teed up Ankersen but the defender fired well over from 18 yards.

Leicester improved, with Mahrez and Vardy linking well, as the game began to open up and Verbic wasted another fine opening when he blazed over Youssef Toulouh's cross before being denied by Fuchs with 20 minutes left.

Ludwig Augustinsson got free on the left and crossed for Verbic but Austria international Fuchs hacked his effort away at the near post.

The Foxes never created anything themselves and, just like in Leicester's 1-0 home win over Copenhagen last month, Schmeichel thwarted Cornelius in the 89th minute when he clawed out his header and Sandanter fired the rebound wide.