Tottenham's Wembley curse struck again as Mauricio Pochettino's men slipped to a 1-0 defeat against Bayer Leverkusen in the Champions League.

Spurs have now won only once in seven matches at the national stadium and they paid the price for another sloppy display as Kevin Kampl's second-half winner left their hopes of qualification hanging by a thread.

The defeat means Tottenham drop to third in Group E, two points behind Leverkusen and four adrift of Monaco, who they play in France later this month.

Another English club-record home attendance of 85,512 turned out to watch under the Wembley arch but, just as Spurs disappointed in their 2-1 loss to Monaco here in September, they failed to deliver again.

It is becoming a growing issue of concern for Pochettino, whose side will play all their Premier League home games at Wembley next season and, in the more immediate future, will surely have to beat CSKA Moscow here in December to stand any chance of making the last 16. 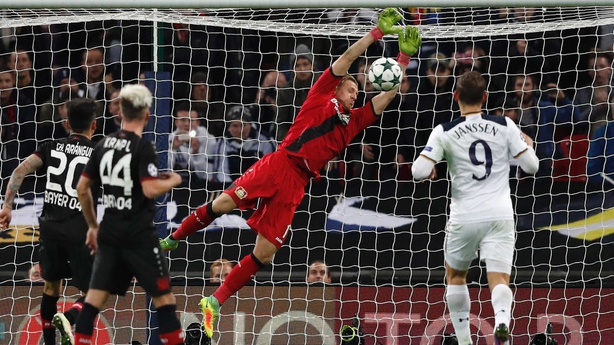 For Leverkusen, this was a continuation of their dominant second-half performance in the goalless draw at the BayArena last month, when they flustered Tottenham with their high-octane pressing game.

Neither Harry Kane nor Toby Alderweireld were deemed fit enough again even for the bench, although there are hopes Kane in particular might play a part in the north London derby on Sunday.

The striker's return cannot come soon enough given Spurs are now winless in six matches and without a goal from open play in their last five.

As the Champions League anthem blared out, Wembley was lit up by a sea of lights from camera phones waving in the crowd but there was precious little otherwise to ignite Tottenham in the first half.

Leverkusen began where they left off in Germany as Javier Hernandez and Stefan Kiessling hounded Spurs' back line, forcing Jan Vertonghen into an early slice across his own box while Hugo Lloris had an array of misplaced clearances. 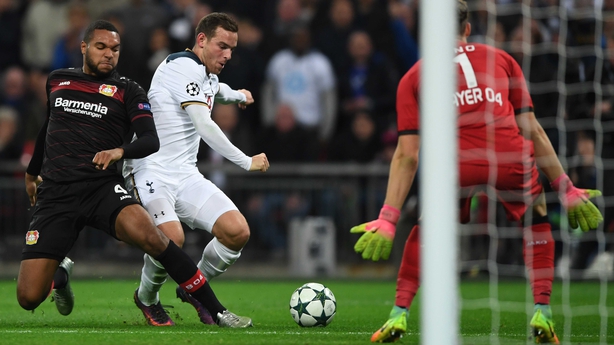 Tottenham's frenetic start took a turn for the worse after 29 minutes when arguably their coolest player in possession, Mousa Dembele, hobbled off to be replaced by Vincent Janssen. This was only Dembele's fourth start of the season and it would be a major blow should the Belgian be unable to face Arsenal.

Christian Eriksen tested Bernd Leno with a shot from distance soon after but that was Spurs' only attempt on goal during a torrid opening half which was summed up in the 43rd minute by Kyle Walker's sloppy touch inside the box. The ball fell to Hernandez, who should have scored but instead flashed wide.

A disallowed goal from Dele Alli on the cusp of half-time was not enough to placate Pochettino, who marched off down the tunnel with the air of a manager ready to let off steam.

Whatever his instructions, Tottenham emerged from the interval with more purpose and Alli thought he deserved a penalty after toppling over Omer Toprak's lunging left leg, but any contact appeared minimal and referee Jonas Eriksson waved away his appeals. 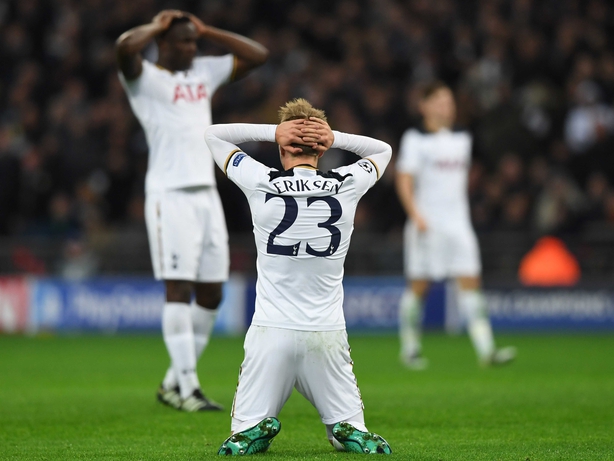 Any gathering momentum, however, was quickly undone. Eric Dier was fortunate not to be punished by Hernandez for a misjudged backward-header and four minutes later Kampl gave Leverkusen the lead.

Charles Aranguiz's shot from the edge of the area was deflected by Ben Davies and then poked by Walker, finally falling kindly for Kampl to slot home from close range.

The goal was met by a deafening quiet and Spurs' fans and players seemed unable to rally in the latter stages.

Dier's bending free-kick crashed against the bar and Leverkusen lashed the ball clear despite Janssen's best attempts to reach the rebound.

It was the best chance that fell to Spurs, for whom Wembley is yet to feel like home.