Chris Brunt and Will Grigg are back in the Northern Ireland squad for the home double header with Azerbaijan and Croatia.

West Brom midfielder Brunt returned from an eight-month knee lay-off last month to feature again for the Baggies while Wigan striker Grigg has not been in either of Michael O'Neill's past two squads because his partner had a child.

There is still no place for Craig Cathcart among the 25, though, with the Watford defender sidelined since September due to a groin injury.

There is also no place for Peterborough's Michael Smith or Ross County's Liam Boyce, both of whom were originally called up for the October games with San Marino and Germany, while Aaron Hughes and Paul Paton, drafted into the last squad after injuries to others, are included.

Brunt has appeared on three occasions for West Brom and he started and completed 90 minutes in the 4-0 defeat to Manchester City on Saturday.

O'Neill is delighted to have him back having missed one of his more experienced campaigners during the summer's European Championships.

"He'd been training well and we hoped he'd be available but in the last few weeks he's made great strides," O'Neill said.

"He's a Premier League player and he's always going to be in our squad. He was a big loss to us in the finals so it's great to have him back."

Grigg was in France, though he did not play a minute, and a new arrival had been behind him withdrawing himself from consideration for the three World Cup qualifiers since.

"He had the situation with the birth of a new child and felt at that time it wasn't the best thing for him to be away for the period of time that he would be away for," O'Neill explained.

"Having had a good conversation with him, he's said he's ready to come back in. He's scored a number of goals this season although the team is struggling and he deserves his place back in there." 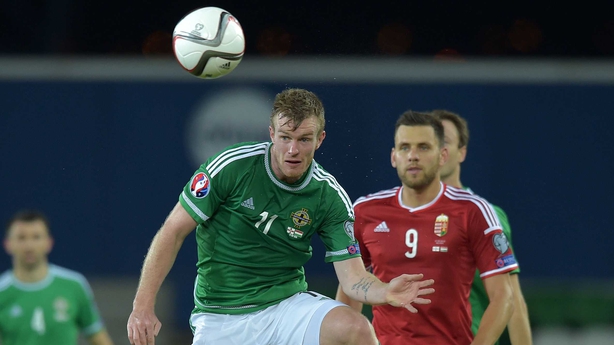 Leeds' Stuart Dallas has been named in the squad, though he has not played for his club since picking up a calf injury just prior to the defeat to Germany on October 11.

"Stuart hasn't played due to injury, there is a question mark but we've named him," O'Neill admitted. "We'll see how he is. What happens this weekend will be a big factor in his availability."

Azerbaijan are the first visitors to Windsor Park a week on Friday and they currently hold second spot behind Germany in the World Cup qualifying group having picked up seven points from fixtures with San Marino, Norway and Czech Republic.

A win for O'Neill's side would see them move above them into second so the Northern Ireland manager appreciates the magnitude of the contest.

"With seven from nine they've had a very good start and not conceded a goal," O'Neill added of Azerbaijan.

"They are not a team that's going to come and attack us, they will be very well-organised and we expect it will be very difficult. When we look at the group, these are the games that we feel will be key leading into where we finish."

Northern Ireland then face Croatia in a friendly at Windsor Park on November 15 and O'Neill has already hinted at rotating his side, so Tom Flanagan and Matthew Lund could be considered for their maiden caps.